SASKATOON -- The Saskatoon Fire Department is preparing to honour two firefighters who died 40 years ago in a massive fire at the Queen’s Hotel - known as one of the worst tragedies in Saskatoon history.

Victor James Budz, 47, and Dennis Aron Guenter, 29, both died in the fire.

Budz was in his 17th year with the department while Guenter had joined less than two years earlier.

Fire Chief Morgan Hackl said he first heard about the fire when he was in his first week of training in September 1987.

“At the time I was so excited to be on the job but I really hadn’t thought about all the danger surrounding the job, so it was quite surreal to think about that day,” he told CTV News.

The Queen’s Hotel fire happened on May 31, 1980. The fire was in the basement of the hotel in a weight room. Hackl said when firefighters were going in and out, oxygen entered the air which caused an explosion and the room went black.

“They lost their hose line and they would’ve been disoriented and then they could not find their way out. They ran out of air and perished in that fire,” he said.

Hackl's counterpart, Chuck Sebestyen, who served as fire chief at the time of the blaze, said the fire brought out 46 men and officers.

"The entire room was just covered in total blackness instantly. There was zero visibility," Sebestyen said in a CTV News archival interview.

In his account of events, Sebestyen said Guenter and Budz were among the first to enter the fire.

They made their way through a maze of weightlifting equipment, 70 feet to the doors of a sauna and showers in the northwest corner of the basement.

Visibility at this point was good but disappeared when there was an explosion of smoke and heat. 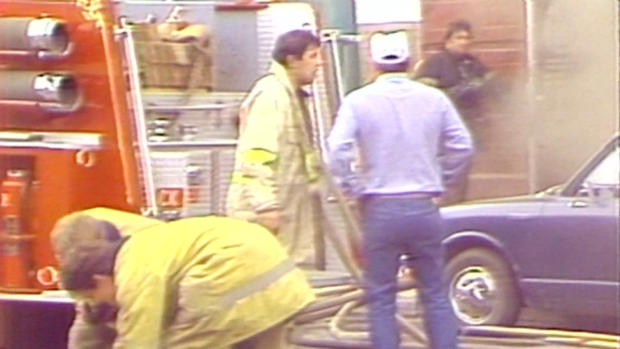 In 2016, a plaque commemorating Budz and Guenter’s sacrifice was installed at the site of the former hotel, located at First Avenue and 20th Street East, now the Scotiabank Theatre. 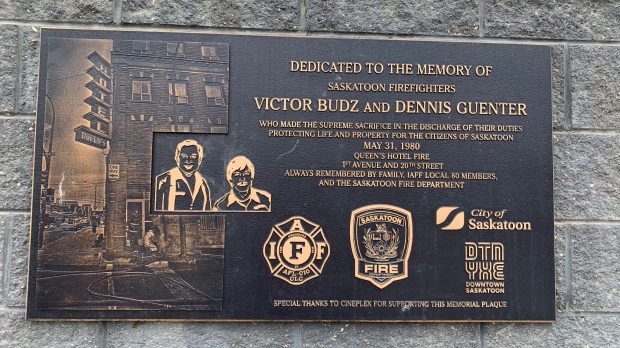 A memorial site featuring a statue of the pair in their fire gear is located outside of Fire Hall No. 6.

Clint Belitsky, a Saskatoon firefighter of 18 years and union representative for IAFF Local 80, said: “‘we never forget’ is our motto in regards to this. It’s just what we do as a family and it’s for their families as well.”

Crews now have larger oxygen tanks (SCBA bottles) that can last up to an hour, and each piece of breathing apparatus has an alarm that is activated if the person stops moving, according to Belitsky, who said these changes were already in place when he got on the job.

He added that the province also made some changes to sauna inspections because a sauna was part of what caused the fatal fire at the hotel.

The Saskatoon Fire Department is holding two short ceremonies on Sunday around 6 p.m. One will be at Fire Hall No. 6 and the other will be downtown outside the Scotiabank Theatre.

The services will be limited to 10 people at each site due to public gathering restrictions.

However, the ceremony at Fire Hall No. 6 will be live streamed on IAFF Local 80’s Facebook page, so firefighters and members of the public who can’t attend are able to pay their respects. 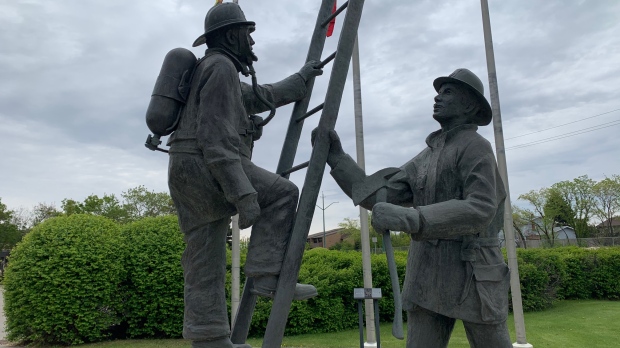 Guenter’s son, Graham, will be attending the service at the downtown site, according to Belitsky.

He added that Budz’s family has been notified about the service and that his son who lives in England will be watching on Facebook live.

Hackl said it’s important to continue remembering people like Guenter and Budz who have sacrificed their lives in the line of work.

“The importance to remember and to continue to remember each year is really important for our service. It’s a brotherhood and sisterhood. We’re a family.”