'Today is an important day': How one survivor is marking the second anniversary of the Broncos bus crash

SASKATOON -- April 6, 2018 is a day many in Saskatchewan will never forget. A bus carrying the Humboldt Broncos junior hockey team, on their way to a playoff game, crashed into a semi-truck, killing 16 people and injuring 13 others.

Among the survivors was Saskatoon’s Kaleb Dahlgren, who was an assistant captain with the Broncos. Dahlgren says not a day goes by that he doesn’t think about the friends he lost at the intersection of Highway 35 and Highway 335 near the village of Armley, where a memorial dedicated to the team now stands.

“I’m still putting the pieces back together, but I’m doing okay,” he said via Skype from his home in Saskatoon. “Today is an important day in the healing process, remembering those that were lost, and those impacted in the accident.”

April 6, 2018 is a day the Humboldt Broncos organization, along with the hockey world, will never forget.

Today and every day, we remember and pay tribute to all 29.

After undergoing rigorous physical therapy, Dahlgren has been able to continue his hockey career with the York University Lions.

“I’ve been really busy. I’m a student-athlete at York, so that’s going great,” he explained with a smile.

“I’m trying to keep busy and positive and give back as much as I can. I’ll graduate next year from business, and hopefully, get into chiropractic studies.”

Last year survivors and their families gathered at the crash site on the first anniversary of the tragedy. Due to COVID-19 and physical distancing they can’t meet in person this year – but Dahlgren says they’re still planning on connecting. 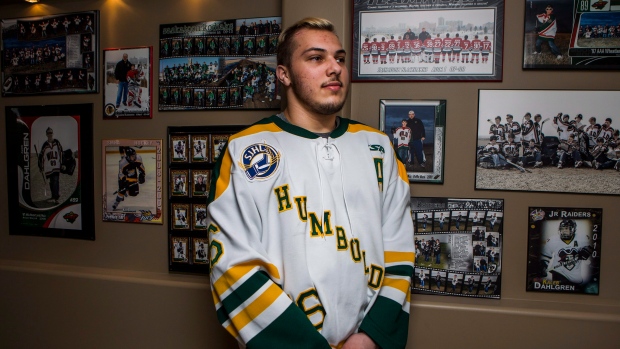 “We’ll have a moment of silence today, and we stay in touch in our group chat. That’s key for us, to lean on each other right now.”

A rallying cry that came out of the tragedy was #HumboldtStrong. Dahlgren said it means the world to him and other survivors to see how Saskatchewan still remembers, with many leaving hockey sticks out on the porch two years later.

“I still can’t get over how much love people show,” Dahlgren explained. “They still have sticks out, and I get so many messages, even today. It’s amazing.”

The semi-truck driver, Jaskirat Singh Sidhu, was ultimately  sentenced to eight years in prison  for his role in the crash. A number of lawsuits have been filed and are ongoing.