'To find her alive was unbelievable': Dog recovers after being shot on family farm

SASKATOON -- A dog is recovering from a gunshot wound after she was shot on her family farm last week, according to the owners.

Busy, a three-year-old Blue Heeler cross, was shot in the lower back on Friday while sitting at the end of her owner’s driveway near Biggar.

“I heard the gunfire so I came running out and I saw a grey truck go past and I saw Busy dart in here yelping,” owner Josh Kuchenbrand told CTV News.

Kuchenbrand said he ran out to the road to catch the license plate. Meanwhile, Busy ran off and was not found until the next morning when she was rushed to the vet.

“To find her alive was unbelievable …I can’t believe how she got that lucky. Her spinal cord runs right there, all her vital organs. She’s a very small dog, she’s about 20 pounds or less. It was amazing that she was alive,” he said. 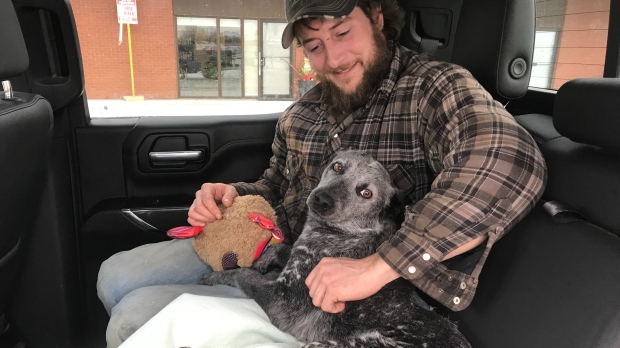 After spending days at a North Battleford vet clinic, Busy was able to go home on Thursday.

Kuchenbrand is facing a hefty vet bill and has set up a GoFundMe page to help with the costs.

Biggar RCMP is investigating and believe the shooting is an isolated incident.

“If we’re looking at responsible gun owners and hunters, everyone does know that you’re not allowed to discharge a firearm within 500 meters of an occupied residence,” said Crozier.

“If it was intentional, then there would be consequences under the Criminal Code for injuring animals.”

Kuchenbrand said it’s unknown what Busy’s life will look like after her recovery.

In the meantime, he’s offering a $200 reward in hopes of finding who’s responsible.