She’s a close friend of missing woman Ashley Morin’s family and a Missing and Murdered Indigenous Women and Girls (MMIWG) advocate. While the fifth of May is another day to spread awareness about the issue, it also unlocks a lot of hurt.

“Everybody’s sharing, and we want that. We want Ashley’s face out there, but the pain that comes along with it is really tough,” said Fox through tears.

Morin, who is from Ahtakakoop Cree Nation west of Prince Albert, was last seen in North Battleford on July 10, 2018. RCMP is investigating her case as a homicide.

She was 31 years old when she was reported missing.

“It’s as hurtful today as it was three years ago, so it’s not getting any better,” said Fox, sitting next to Morin’s mother, Diane.

“Diane’s heart is hanging on the outside of her body,” she said.

Fox said she’s planning a walk across Canada to spread awareness of MMIWG, starting in Feb. 2022. Morin’s mother will be joining her.

Fox is currently fundraising for the walk, through items such as T-shirts, on her Facebook page Krista’s Kilometres for MMIW.

Fox said since Morin disappeared, she’s been helping her family connect with others in similar situations. This includes the family of Happy Charles, who has been missing for four years, and the family of homicide victim Tiki Laverdiere.

In July 2020, on the second anniversary of Morin’s disappearance, RCMP said they were looking into a van spotted at a location where she was last seen. The two-tone van was on the corner of 96th Street and 16th Avenue in North Battleford at about 9:30 p.m. on July 10, 2018.

Morin was last seen wearing grey sweatpants, a black T-shirt with white writing, a black hat and sunglasses. Anyone with information on her disappearance is asked to call the RCMP Major Crime Unit North at (306) 975-5153 or anonymously through Crime Stoppers at 1-800-222-8477.

Sherry McLennan, a regional director with Metis Nation – Saskatchewan, organized a demonstration outside of her campaign office in Prince Albert for Red Dress Day.

About 10 people held up signs along Second Avenue West reading ‘no more stolen sisters’ and ‘leave our women and girls alone.’ Firefighters and police officers were also there to show support. 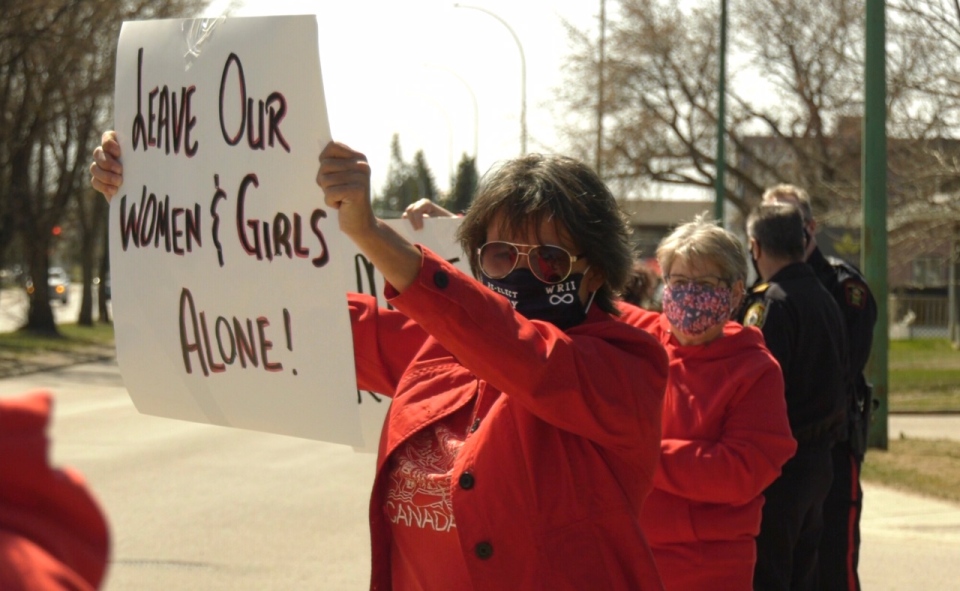 McLennan said it’s important to report people missing immediately, and for search groups to step us as soon as possible.

“If we work together with police, ambulance and front line workers, that we can come up with a plan to get out there as soon as we know that somebody is missing,” she said.

One of the demonstrators was Marilyn Stone, whose aunt, Elaine Ducharme, was reported missing in La Ronge almost 30 years ago.

A Saskatoon StarPhoenix article published in May 1994 says a woman named Elaine Ducharme was 35 years old when she went missing. About a year after her body was found in a shallow grave south of La Ronge, a 59-year-old man was charged with murder.

“Back then, things were very different. We didn’t always search quite as quickly as what we try to do now, so this is why it’s so important to so many of us to bring awareness,” said Stone.

“We need to represent that this isn’t acceptable. My aunt was taken from us many years ago and it still has a daily impact on myself, on the ways I raise my children and what I want to do in our community.”