'They said I could touch it': Stanley Cup visit excites young hockey fans in Prince Albert

'They said I could touch it': Stanley Cup visit excites young hockey fans in Prince Albert

Wednesday was a special day for hockey fans in Prince Albert.

Stanley Cup champion Josh Manson finally got his day with the cup, more than a month after his Colorado Avalanche bested the Tampa Bay Lightning in six games.

The first stop on the Josh Manson cup tour was in Prince Albert at the rink where he grew up, spending time and taking photos with the next generation of young hockey players.

“It was fun, it was exciting, and I didn’t know if I could touch the cup or not,” said Beaudray Nelson, who plays for the Prince Albert Oilers. 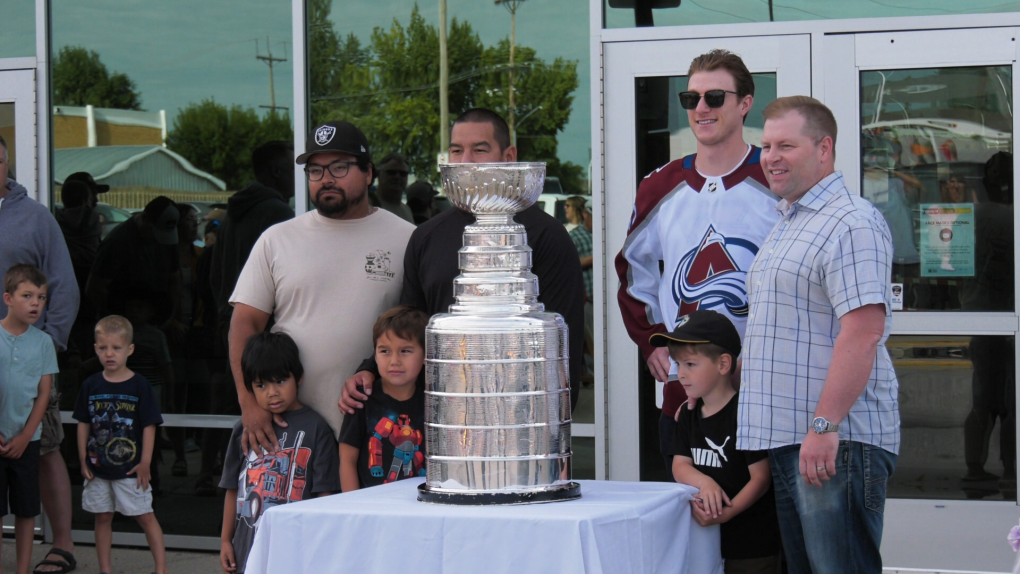 ”So when they said I could touch it, it was pretty cool.”

Manson played minor hockey in Prince Albert before going to Northeastern University, where he was named to the Hockey East All-Academic team and All-Star team.

He played the first eight seasons of his NHL career with the Anaheim Ducks.

Manson was traded to the Avalanche in March, joining them on a run to the championship in June.

The young hockey players know how rare it is to get up close and personal with hockey’s holy grail.

“I mean, it's the cup of a lifetime,” said Oilers goalie Ryker Burns. “The chances of me seeing the cup again in person, it's probably near impossible.”

For Manson, who admits he once considered giving up the game as a teen, it was important to show the kids what can happen when you set your sights high.

“That was the hope, that by having it here and sharing with minor hockey players of Prince Albert, one day that’ll give them a little extra drive to want to win it, and to achieve their goals,” he said.

Manson was born in Illinois and he’s spent most of the last decade playing in California.

But the 30-year-old defenseman appreciates the support he gets from the place he grew up.

“To live out your dream as a hockey player and then to be able to share it with your family and the people of the city where you grew up and supported you... I can't put it into words — it's very special,” he said.

Since Manson joined the Avalanche in March, he's made an immediate impression on the team’s brass.

He signed a four-year, $18 million dollar contract with the team in July.

Along with his teammates, Manson will begin the work to defend to hold on to the Stanley Cup on Sept. 23 when training camp starts in Denver.