SASKATOON -- Lyle Bear and his family are in the middle of getting their basement window replaced after someone recently broke into their new home in Battleford.

“They really wanted to get in here and I don’t understand why. There are little footprints, size four, so my guess is they threw in a little kid in here to go open the door,” said Bear.

The family was moving from Saskatoon to Batlleford to be closer to family in Mosquito First Nation and Big River First Nation.

They arrived in Battleford at 11 p.m. on Aug. 7. They moved what they could into the house and decided to stay in a hotel overnight. The family believes the break and enter happened shortly after, around 1 a.m. Aug. 8.

Neighbours told the family they saw a loud grey Dodge truck park in the driveway before the home was broken into. They thought it was the family still in the process of moving in.

“When we came back the next day, I went downstairs and felt a cool breeze and I thought what’s going on here? The east bedroom, in the basement was completely ripped off,” said Bear.

The suspects stole a full deep freezer of meat and the deep freezer, a bag of men’s jewelry, a laptop, a shop vacuum, and keys for one of their vehicles. Bear says all of it can be replaced except for a rare brown eagle feather fan passed down five generations to the Bear family from the Spyglass family. 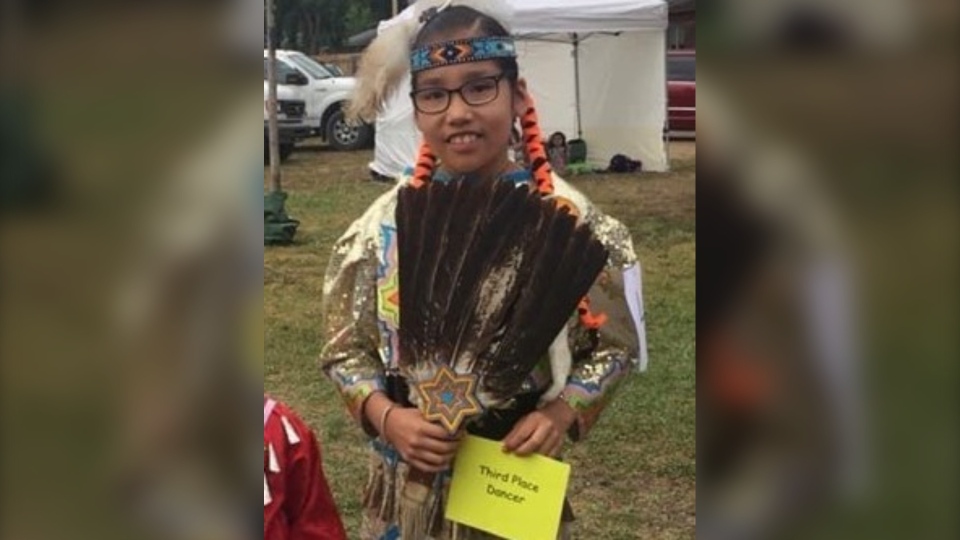 “After I realized it was a break and enter, immediately went upstairs and checked where I put my baby girl’s eagle feather fans and sure enough they were gone. I felt sad and called the police without looking for anything else that went missing,” said Bear.

The fan now belonged to Charmaine’s daughter, 10-year-old, Brianna, who has been dancing the jingle dress dance since she could walk. A similar and newer white eagle feather fan Brianna received as a gift and made from a family friend was also stolen.

“I’m sad that my fan was stolen. Both fans meant a lot and I just want my fans back,” said Brianna.

“It hurts me a lot because they shouldn’t have taken from my daughter. I forgive them and I just really want the fans returned,” added Charmaine.

The family has since notified the North Battleford RCMP, made a Facebook post and have searched and called numerous buy and sell Facebook groups, web pages and local pawn shops. There is also a $500 reward for the brown eagle feather fan.

“That fan is just irreplaceable. It needs to come back to its owner. Anything else stolen we really don’t care, those items can be replaced.”

If anyone has any information on the break and enter, the family is asking the public to call Battlefords RCMP or Crimestoppers.