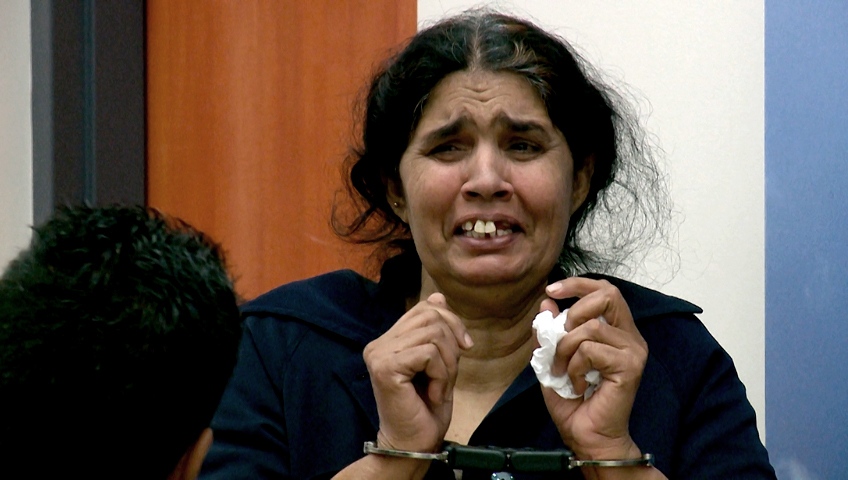 Jamila Bibi sobs as she is deported to Pakistan from the Saskatoon airport Sept. 16, 2014.

A decades-long family dispute and false accusations of adultery that landed Jamila Bibi in a Pakistani prison surely filled her mind as she was deported from Canada this week.

The elderly mother of six fled her home country of Pakistan and moved to Canada in 2007.

She feared her life was in danger, that she could be the victim of an honour killing because of the adultery accusations.

The Canadian Immigration and Refugee Board, reviewing her refugee status in 2009, disagreed.

Federal adjudicator Negar Azmudeh wrote that while she found Bibi a credible witness — Azmudeh noted she believed the accusations of adultery were false and acknowledged the mental and physical abuse Bibi said she suffered at the hands of her husband’s uncle — she did not believe her life was in danger.

Jamila Bibi left Pakistan shortly after she was attacked and woke up in prison facing charges of adultery and prostitution, according to a document Bibi filed to Canada’s Immigration and Refugee Board in 2007.

She was tortured and her clothes were torn off in the attack, the document reads.

Her husband’s uncle, Mohammad Boota, was one of several people who attacked her.

The incident stemmed from a decades-long land dispute between her and Boota that began shortly after her husband Haji Basharat Ali accepted a job in Saudi Arabia.

The document alleges Boota’s family was caught up in criminal activity, had spent time in jail and was struggling financially. They were forced to sell their land to Bibi and Basharat.

Both sides agreed to the sale but, while Bibi waited for the land title, Boota requested her three daughters marry his three sons — which would make the land part of the dowry, allowing Boota’s family to retake the land.

Bibi and her husband rejected the offer, forcing a court to eventually — in 1992 —rule in their favour.

Boota refused to acknowledge the court’s ruling, according to Bibi’s account. He set fire to an office that stored court records, burning the land file document, and began harassing Bibi.

The attacks continued for years and police reports seemed not to deter Boota and his sons. She was hit with iron rods. Bricks and stones were thrown at her. Her husband was shot in the leg.

The attacks escalated until she was knocked unconscious, accused of adultery and forced to spend two nights in prison.

She was only able to flee Pakistan with the help of a parliamentary candidate, she said.

Bibi not in danger, review board rules

Federal adjudicator Negar Azmudeh wrote in her 2009 review of Jamila Bibi’s refugee status that she did not believe Bibi’s life would be at risk if she returned to Pakistan.

“There are no substantial grounds to believe that her removal to Pakistan will subject her personally to a danger of torture,” the Canadian Immigration and Refugee Board review read.

The review stated Bibi was a credible witness and acknowledged her story seemed believable, but argued several reasons she was not in danger.

Azmudeh argued that Mohammad Boota and his sons, because of their lack of education and their diminished wealth, would not learn of Bibi’s return. She also pointed out that Boota had yet to harm Bibi’s daughters.

“I have no sufficient credible evidence before me to suggest that the Bootas will besiege their resources to find the claimant anywhere in Pakistan to harm her,” Azmudeh wrote.

She stated the parliamentary candidate, who helped Bibi escape and who was eventually elected to parliament, would aid Bibi. She would not be forced to plead her case in court, Azmudeh wrote. She would not face sharia, the body of Islamic law — some followers of sharia law believe those who commit adultery should face death by stoning.

Azmudeh argued, because Bibi left Pakistan legally, police proceedings against her had concluded.

She also stated Bibi’s husband, who had supported her throughout the attacks, would continue to support her following the refugee board decision.

Azmudeh seemed unaware in her review that Bibi’s husband had filed for divorce just prior to the hearing date. The divorce was finalized three months after the hearing.

The review said Bibi did not need protection and ruled Bibi was not a convention refugee — a refugee whose fears of persecution in their home country are well-founded.

Jamila Bibi was in hiding in Pakistan one day after she was deported from Saskatoon, according to a close friend. She was crying and could hardly speak when the two talked over the phone. She was still afraid she’d be killed.

Amnesty International, while discussing her deportation, cited a report from the Human Rights Commission of Pakistan stating nearly 900 honour killings took place in Pakistan in 2013 alone.

Bibi’s lawyer, Bashir Khan, has stated several times throughout her case she will be stoned to death if she returns to her home country.

The United Nations initially halted her deportation, stating they needed more time to review her case.

She was scheduled to be deported in 2011.

The UN only recently informed CTV the request to stop her removal was withdrawn. The order was lifted based on evidence from Canadian authorities, an email from the UN read.

The email did not clarify when the request was lifted and what evidence was presented, but stated the UN was still reviewing the case while Bibi is in Pakistan.

Khan said he was not aware of the UN’s decision to lift the request but stressed it doesn’t weaken — neither legally or morally — the case that Bibi should not have been deported.

--- with files from Angelina Irinici and CTVNews.ca Staff