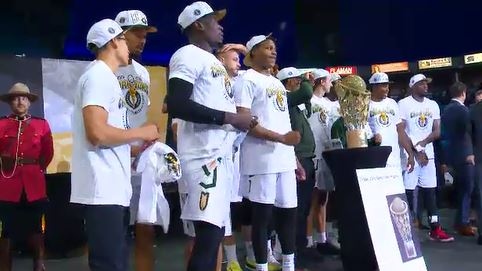 The Saskatchewan Rattlers are presented with the 2019 CEBL championship trophy.

SASKATOON -- The SaskTel Centre is streaming what it calls two of the best games in the arena’s history on Saturday.

It will broadcast the Saskatchewan Rattlers championship game last year versus the Hamilton Honey Badgers and the Saskatoon Blades’ Memorial Cup bout against the Halifax Mooseheads from 2013.

The cost to watch is $2 which will support the teams and COVID-19 relief efforts in Saskatchewan, SaskTel Centre said in a Facebook post.

Each ticket is also an entry to win prizes from the teams and SaskTel Centre.