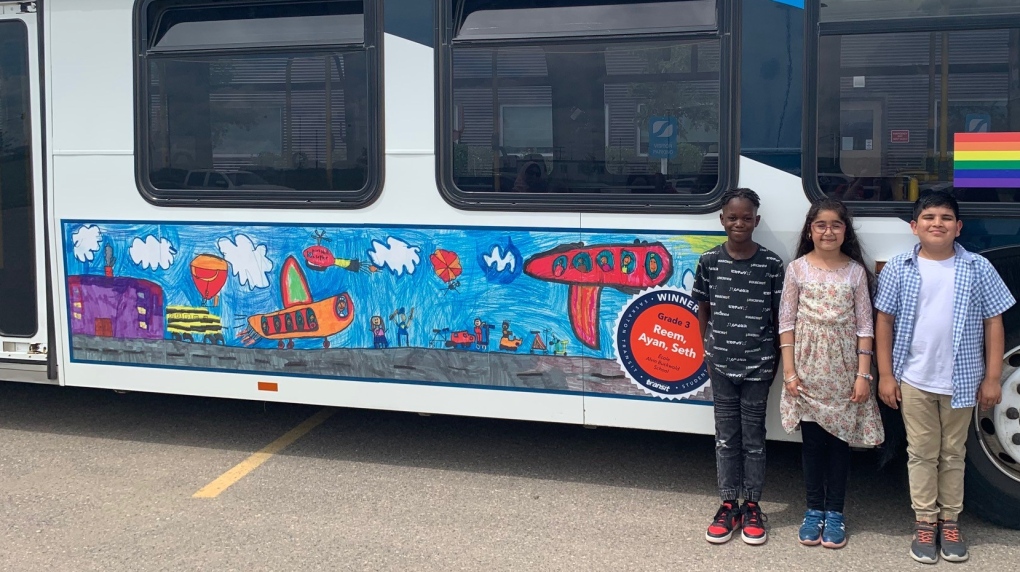 Saskatoon will soon have 10 buses hit the roads with a fresh new look over the summer.

On Thursday, Saskatoon Transit revealed two pieces of art designed by students in a contest that will be displayed on the sides of buses.

The contest was open to students in Grade 3 and 7 across the city, a news release from the city said.

The four Grade 7 students say it was “really exciting” to win the contest and are looking forward to seeing their design on the road. They say it took a month to complete their design.

Their work features cars driving on two roads floating in space with Earth floating in between with the words “save the earth” on it.

The winning photos were chosen through a collaboration with Remai Modern. The judge based the submissions on how well they reflected the “active transportation” theme.

The other winning design by the Grade 3 students features a road with various modes of transportation such as a city bus, helicopter, plane and a school bus.

Saskatoon Transit Acting Director Tracey Davis says it’s important to have kids be involved, especially as the Grade 7 students prepare to take the bus more often as they head towards high school.

“It gives them comfort and familiarity with that form of transportation … we asked the kids how many of them have taken the bus and we had a lot of hands shoot up,” Davis said during the unveiling.

Davis says kids are taking the bus actively now and “it’s exciting to see that.”

The Crown is seeking to revoke bail for Tamara Lich, a leader of the "Freedom Convoy," after she appeared alongside a fellow organizer in an alleged breach of her conditions.

The gunman who attacked an Independence Day parade in suburban Chicago fired more than 70 rounds with an AR-15-style gun that killed at least seven people, then evaded initial capture by dressing as a woman and blending into the fleeing crowd, police said Tuesday.

Dressed in Indigenous regalia, National Chief RoseAnne Archibald strode into the annual Assembly of First Nations gathering in Vancouver ahead of a group of chanting supporters on Tuesday. Just the day before, Archibald said she had been 'erased' from the agenda after her suspension in June. Instead, she led opening ceremonies and welcomed attendees in her opening address.

What we know about the Highland Park shooting suspect