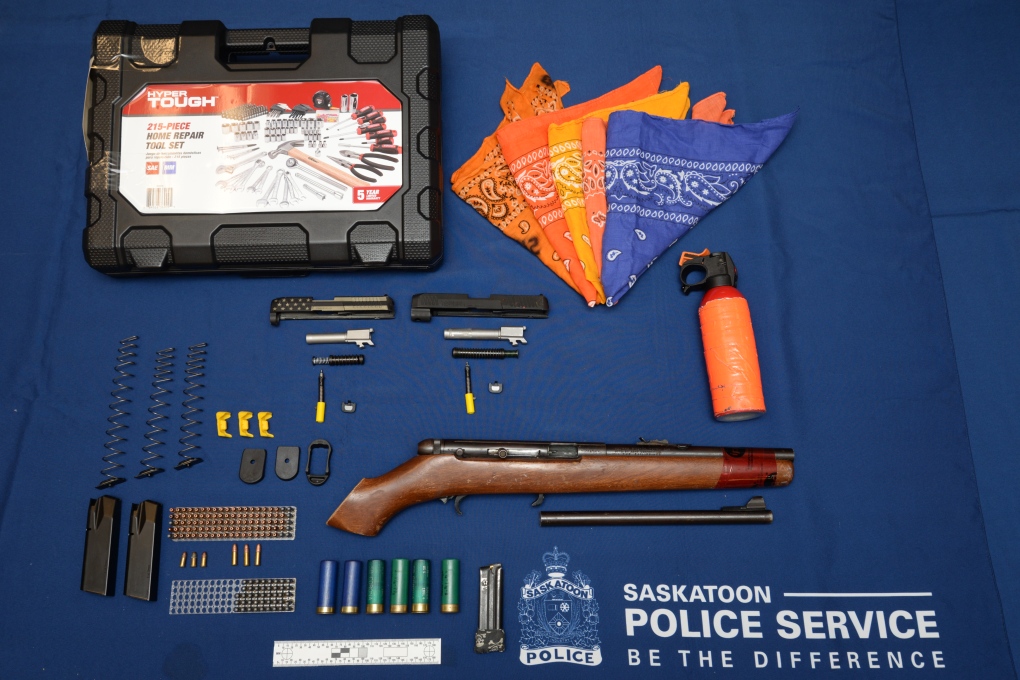 Saskatoon police seized several items from a home in the 2500-block of Albert Avenue, including weapons and ammunition. (CBSA/Saskatoon Police Service)

Canada Border Services Agency (CBSA) and the Saskatoon Police Service (SPS) have charged a 16-year-old in connection with an alleged weapons smuggling investigation.

The investigation began on Sept. 2 after CBSA were alerted to a “suspicious" package at the Vancouver International Mail Centre that was being sent to an address in Saskatoon.

“Officers examined the package and discovered two gun barrels and two overcapacity 9mm magazines prohibited in Canada under the Criminal Code and Firearms Act.,” SPS said in a news release.

The items were packaged as a commonly-used construction tool and were shipped from the U.S., according to police

On Sept. 8 CBSA referred the case to the SPS and the guns and gangs unit began to investigate. A search warrant was issued on Sept. 13 for a home in the 2500-block of Albert Avenue.

SPS said a loaded, sawed-off .22 calibre rifle and ammunition was found a the home.

Other items were seized, including a 83mm barrel, a 102mm barrel, two 15-round capacity magazines and ammunition. Bear spray was also seized, SPS said.

Police arrested a 16-year-old boy at the scene. He is facing gun-related charges including possession of a weapon for dangerous purpose and importing a prohibited device to Canada.

“Saskatoon, like many other communities across the country, has seen an increase in the number of firearms tied to criminal activity. Partnerships with agencies like the CBSA give police a greater opportunity to be proactive in removing these firearms from the community," Huisman said in the new release.

“CBSA officers and staff are committed to detecting and intercepting prohibited firearms and firearm parts, as well as other weapons and dangerous goods, before they enter Canada,” Brad Wozny, Regional Director General, CBSA Prairie Region said.

“The seizure announced today is a great example of how our officers work together across jurisdictions and with local law enforcement partners to keep Canadians safe.”

The teen has been released on conditions. SPS said the investigation is ongoing.

A 23-year-old Ontario woman has been charged under the provincial welfare services act after a graphic video of a horse being dragged surfaced online. One video shows the horse being pulled with ropes as its back hooves drag along a road.

Alberta Premier Danielle Smith is reversing a promise to enshrine human rights protections for the COVID-19 unvaccinated in law this fall.

How much water do you need to drink in a day? ‘Eight glasses a day’ rule a myth: study

You may have heard the oft-repeated advice to drink eight glasses of water a day, but according to a new study, the amount of water we need daily ranges wildly based on numerous factors.

An Abbotsford police officer was caught on camera punching a man twice in the face during the course of an arrest this weekend, prompting a review by the department and a provincial watchdog.

If you are expecting a baby and are still trying to choose a name, these new top 100 lists might help you to find one.

Is Alberta's approach to addiction truly behind the declining number of drug-poisoning deaths?

While the Alberta government and federal Conservative party claim the province's recovery-oriented care model is the reason that fatal drug poisonings have decreased by almost 50 per cent over a year, the statistic doesn’t show the full picture, cumulative data analysis shows.