SASKATOON -- A Saskatoon teen is accused of making a fake bomb threat that temporarily shut down Princeton University in September, according to Edmonton police.

The school said it received a bomb threat to its art museum, library, study hall and chapel around 9 a.m. on on Sept. 19.

Zachary Shevin, a junior at the Ivy League university located in New Jersey, said at the time of the threat, the majority of students were remote learning, not on campus because of COVID-19 protocols.

From home, Shevin got the alert to his phone.

“Getting that notification was just sort of out of the blue because I hadn’t heard anything from people on campus,” Shevin told CTV News.

“I remember seeing from friends on Twitter, people posting about it, just kind of confused and not sure what was going on.” 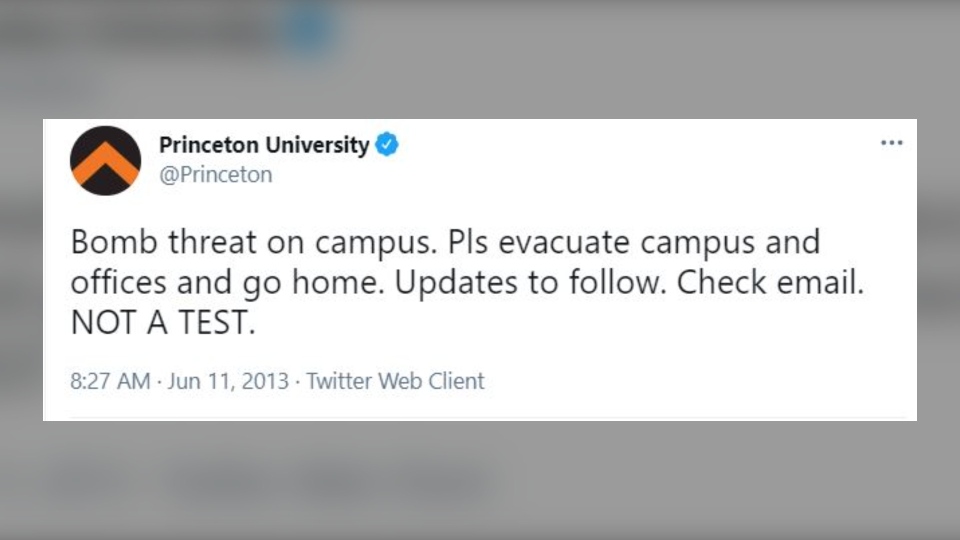 An evacuation was ordered on campus and the targeted areas were inspected.

Saskatoon police allege calls made by the teen to airports, businesses and law enforcement agencies claimed "violence with weapons had occurred and people were critically injured.”

All the calls were fake, but “incited panic and fear, and cost tens of thousands of dollars in emergency response,” according to Saskatoon police.

In March, a 15-year-old Saskatoon boy was arrested by the Louisiana Sheriff’s Office. He is facing American charges related to swatting.

Swatting is the act of tricking police into dispatching SWAT teams for a fake emergency. The 911 caller’s identity and location is typically disguised by using computer software.

In this case, the accused allegedly used a voice call over the internet (VoIP).

“He is being held in Louisiana pending extradition to New Jersey,” Casey DeBlasio of the Mercer Country Prosecutor’s Office said.

Saskatoon police said it anticipates more charges will be laid against the teen in both Canada and the U.S.