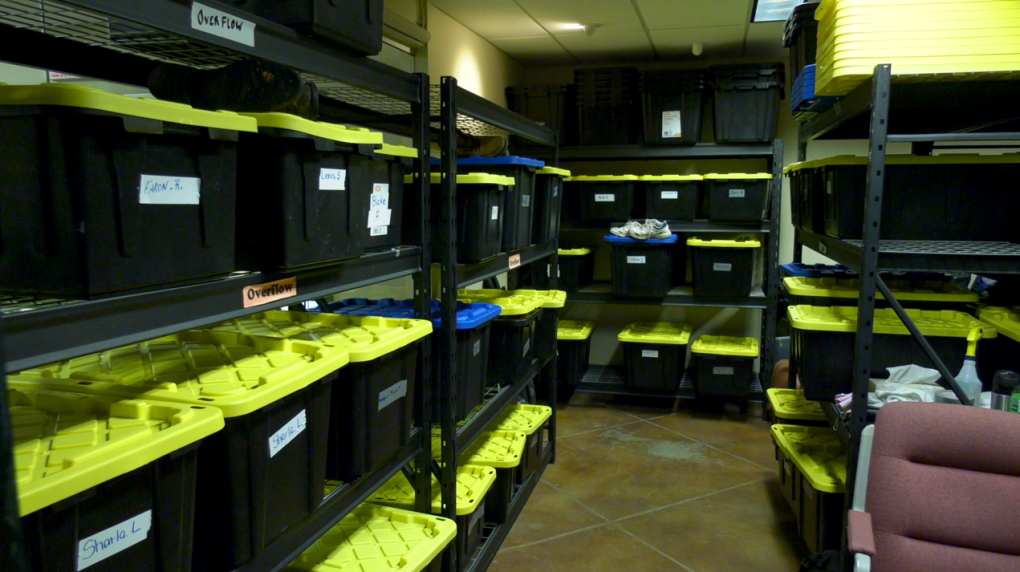 The STC Wellness Centre has a room where people can safely keep their belongings. (Chad Hills/CTV Saskatoon)

The Saskatoon Tribal Council's (STC) temporary downtown shelter has been granted an extension to operate at its present location until April 2023 — but Tribal Chief Mark Arcand hopes to relocate well before then.

"We could be out of here in six months," Arcand told council.

The STC is planning on eventually moving the wellness shelter to a permanent location 20th Street West.

Arcand said the STC is working to coordinate the necessary renovations at the site.

During the meeting, Arcand also said he felt the shelter was being unfairly scrutinized compared to the Lighthouse and Salvation Army.

"It seems like under this whole process of when we're trying to help people feel really targeted. I feel really unfortunate about some of the discussions," Arcand said.

"I'd rather sit down and talk to people and have an honest discussion about how we can do things together to make it better for everyone — and I think we've lead by example."

The request to extend temporary shelter was supported unanimously by council.

Highland Park Police Chief Lou Jogmen said Monday afternoon that police have identified 22-year-old Robert E. Crimo III as a person of interest and cautioned he should be considered armed and dangerous.

The federal government says it has signed a $20-billion final settlement agreement to compensate First Nations children and families harmed by chronic underfunding of child welfare.

Canada Soccer says it has made a new compensation offer to its men's and women's national teams.

Canadian airlines and airports claimed top spots in flight delays over the July long weekend, notching more than nearly any other around the world.