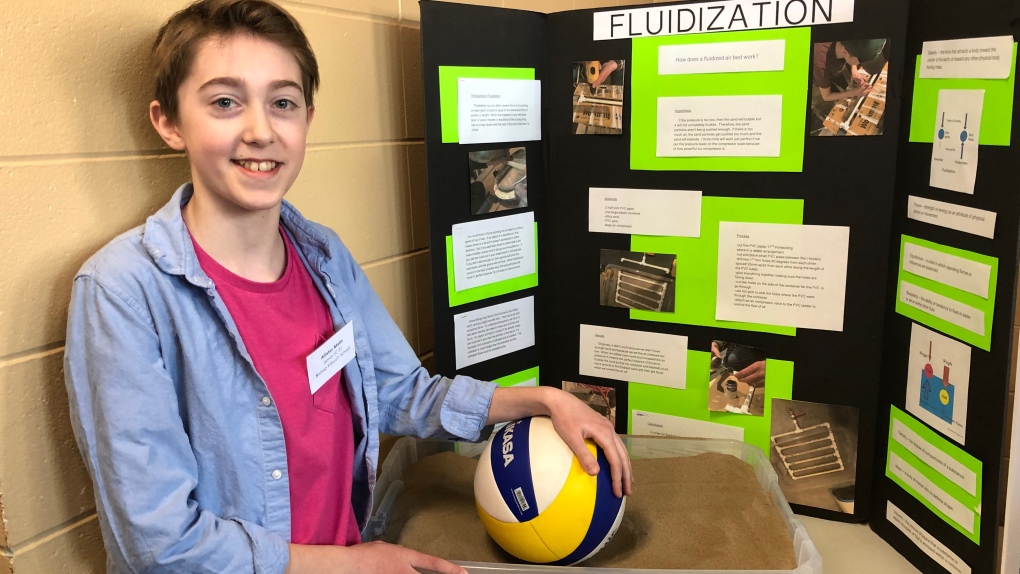 This is Allister Malin’s first year participating in a science fair.

Malin, who is in Grade 7, was chosen to represent his school, Bishop Filevich, at the Saskatoon Regional Science Fair.

He created a fluidized air bed, which turns sand into liquid by using pipes and just the right amount of air.

“The sand particles hover in equilibrium with gravity pushing down but the air through the PVC pipes pushing up.”

He said he got the idea for the project after watching a YouTube video by a man named Mark Rober, who explains the science behind it and shows people how to make their own fluidized air bed at home.

After watched the video he thought, “Whoa that’s really cool, why don’t I just do that?”

He was one of 151 students from Grade 6 to 12 who presented their science projects to judges and members of the public at the University of Saskatchewan Wednesday morning.

“Our students are the next generation of researchers, innovators, and entrepreneurs who will help solve some of the world’s most pressing problems,” said Scott Adams, president and board chair of the Saskatoon Regional Science Fair, in a press release.

The projects feature innovations and experiments in the areas of environmental sciences, engineering and computer sciences, physical and math sciences, and health and life sciences.

Malin demonstrated how the fluidized air bed works by using a volleyball. At first, he showed that the sand was rock hard and that it was challenging to spin the volleyball on top of the sand. Then, when he turned on the air, the sand started bubbling, allowing the volleyball to be moved up and down easily.

He said his favourite part of the process was getting to build it.

While this is Malin’s first fair, he said he’s always had an interest in science.

“Ever since Grade 4, I’ve been interested in light waves and physics.

“[This project] has to do with air flow, air pressure and buoyancy – that’s all force.”

Malin said he got a positive response from judges.

“One judge already came by and I could tell that he thought it was really cool and at the end, he said he’s out of questions.”

When asked how he’d feel if he wins, Malin said it would be “crazy.”

Top students will represent Saskatoon at the Canada-wide science fair in Fredericton in May.