Kathy Walker says the first thing she did once she heard her sister Dawn Walker and nephew were found alive and safe on Friday was take a shower.

"I hadn't combed my hair in days, that was the celebration," Kathy said.

On Sunday evening, people gathered at Kiwanis Memorial Park to show their support for Dawn Walker and her seven-year-old son.

The pair had been missing for nearly two weeks and were found safely by U.S. authorities on Friday in Oregon City, Oregon. According to Saskatoon Police Service (SPS), the pair illegally entered the U.S.

Kathy says the news that their loved ones were alive gave her "immense relief and joy."

"I can't describe how wonderful it felt to know they were still with us," she said while holding back tears.

Walker will be returned to Saskatoon to meet with investigators and U.S. authorities are working to return her son to a legal guardian. 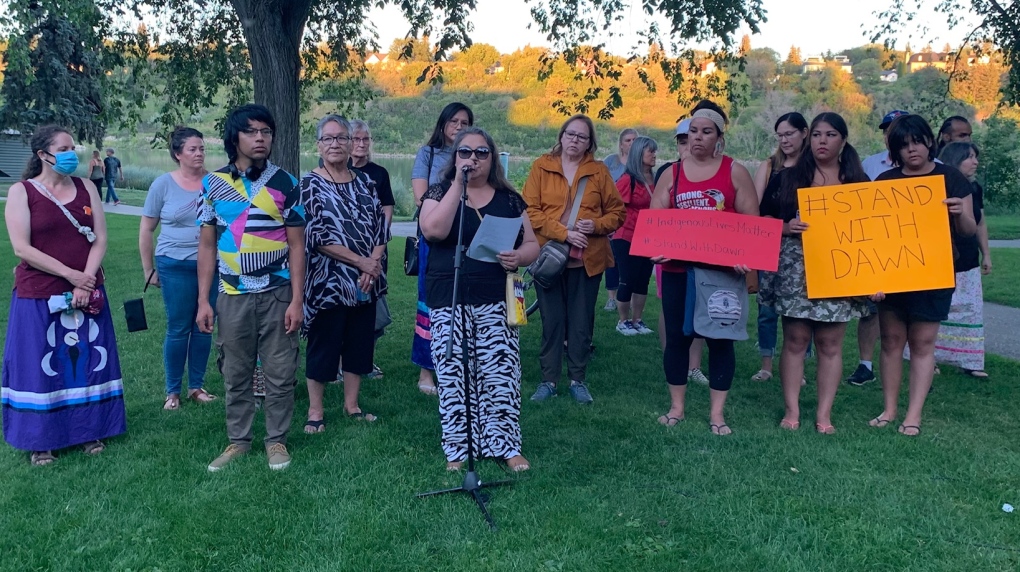 A rally was held in support of Dawn Walker in Saskatoon on Aug. 7, 2022. (Miriam Valdes-Carletti/CTV News)

Walker could potentially face charges in the U.S. and Canada.

A GoFundMe page has been set up to raise funds for Walker's legal defence, more than $13,000 has been raised as of Sunday.

Kathy says she doesn't know all the details of why her sister felt the need to flee with her son but believes she would have had "really good reasons."

"I know that she had ongoing issues with the legal system and I think she felt that she didn't have any other option and I feel like there's a lot of other women in her shoes," she said.

Walker is currently in the U.S. and Kathy says there's a limited amount of phone calls, visits and people she can access and she hasn't been able to speak with her directly.

Kathy was told when her sister found out about the support she was receiving on the other side of the border "she broke down in tears."

Signs at the rally could be seen with the phrase #StandWithDawn.

"Even though this is the worst of times, it's also in a way the best of times because the way that our family and our community came together and other members of the public to really support our family and Dawn, it's really been uplifting," Kathy said.

Saskatoon police are expected to provide an update on Monday with details of the investigation.