“We’ve seen more firearms used, more firearms present at offences. In fact, this year so far, we’ve seized 339 firearms at some of the calls that we’ve attended, so that certainly was concerning and something we’re monitoring," Troy Cooper said during a year-end interview with CTV News.

Cooper said the trend began in 2020 and has extended into this year.

“We’re trying to determine now, are they coming from somewhere that we can address through different enforcement measures," Cooper said.

"And what can we learn about it and is there any way we can restrict that and make some changes so the community is safer and our staff are safer?"

Cooper said there was also an increase in calls for violent crimes.

“What we found was that crimes against persons so, what we classify as violent crimes, were a little bit more in 21 than 2020.

At the same time, Cooper said property crime was down "a little bit.”

Cooper also said the number of sexual assault reports declined — but he believes restricted access during COVID-19 is behind the change.

“The police were less available for a while actually, we reduced access to our front office," Coper said.

"Hospitals are harder to get into where you might be reporting, schools were adjusted in how they interacted with students, so people had less opportunity to report some of those offences." 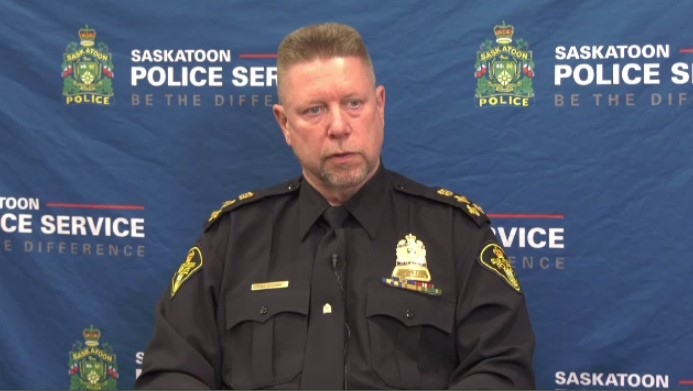 He said with pandemic recovery underway, the number of reports is starting to rise.

People were restricted in their movements and stayed home. So, seeing some of those numbers increase, I think that’s a good news story, sadly, that people have been able to reach out.”

Meanwhile, Cooper said the homicide rate in Saskatoon is down this year – something he partly attributes to police programming.

“I’m troubled to talk about (homicide) in terms of statistics because behind each one of those numbers is a family and a victim and a community that’s impacted incredibly,” he told CTV News.

“Not to see gang violence for example, not to see that present in some of these offences is I think a strong indication that some of our programming is working around street gangs and violence in the community.”

This year, police also saw an increase in calls related to social issues like addictions and mental health, according to Cooper.

“This is the result I think of a lot of different factors including the impact that COVID had in pushing people who are already vulnerable, further into marginalized positions," Cooper said.

"People who have needs that aren’t being addressed in other areas of the community such as housing and addictions requirements.”

Cooper said police and enforcement can only go so far to address these needs and that SPS is looking to continue working with community agencies.

"We’ll focus on what our role is, which is in enforcement and criminal justice where required, but we do need people to help us with addictions issues and with homelessness issues and with mental health issues.”

Cooper highlighted some partnerships SPS already has in place, including its work with Saskatoon Tribal Council (STC) — most recently collaborating is on the temporary emergency shelter STC opened downtown earlier this month.

Cooper said police are acting as an advisor to the shelter to determine which police resources could be used or whether there are other, more effective avenues for security.

Perception of safety downtown is another thing SPS is working on, according to Cooper.

"There’s a lot of locations down there where people go to seek help or treatment or support. And so, when the number of those people who require that increase, there is more visibility around it.”

Cooper said while the official numbers for 2021 aren’t in yet, it appears crimes happening downtown haven’t increased — with some areas seeing a decrease.

He said the five alternative response officers SPS swore in over the summer are having a positive impact on the downtown.

The officers, who are unarmed and look different than regular officers, are specially trained in de-escalation and work to make connections with people in the downtown.

“That program is highly successful. We’ve had great reviews from it. It’s I think addressing a gap that we found in enforcement and in public safety generally in the downtown,” Cooper said.

Cooper said COVID-19 continued to be a challenge throughout 2021.

He said not having vaccines available for officers at the start of the year and having to send them into dangerous and risky situations was not ideal.

“It added incredible stress to the frontline, not only because of the risk of contracting the disease, but also because of their likelihood of being asked to self-isolate away from family and friends,” he said.

“The environments that we send our staff into are uncontrolled and so, no amount of protective equipment is sufficient when you can’t control the environment," Cooper said.

"Once we had that, I think that was an incredible moment for us to be able to protect our staff through vaccination.”

Police enforcement of gathering sizes and large rallies throughout the year also took up a lot of resources, Cooper said.

“We had 18 occasions where there was large gatherings where we had to actually manage traffic flow, crowd sizes, that kind of thing. And then there was the investigation component of it. So, investigating the offences takes a lot of resources and those offences changed over the year, to now masking requirements,” he said.

On a few occasions this year, SPS released photos of people who allegedly attended protests against public health rules and violated COVID-19 rules at events, in hopes of having the public help identify them.

It’s a tool Cooper said was helpful and took off some pressure on police resources.

Cooper said the some of the money will be used to address the increase of emergency calls and the officers needed to serve the city’s growing population.

“This year, with stresses and pressures that COVID brought to our frontline, we found that our patrol officers, our frontline was calling out overtime to address some of the needs in the community and they’re calling out staff that’s already exhausted from the work that they’ve been doing,” he said.

“So for us with a new budget, new staffing once we can get them recruited and trained and on the street, hopefully that’ll give a little reprieve for our really exhausted frontline group.”

Cooper said it will take time for those new staff members to start, so he is looking at increasing alternate response officers or special constables to help take some of the pressure off in the meantime.

As for police priorities in 2022, Cooper said continuing to working with agencies to address needs in the community is top of the list.

“We have to focus on our strong partnerships in the community. If policing isn’t the appropriate agency to deal with mental health and addictions, then we need to find partners that are accountable, partners that can take up that work and make sure that we are all successful together as a community.”

Cooper said reimagining the role of police in the community when people call 911 is another focus for SPS.

“Does it always have to be a police officer that’s dispatched? Maybe more appropriately, it could be a police and crisis team or perhaps a mobile crisis worker on their own. So, this is the kind of thing we’re addressing in our 2022 plan.”

A scientific analysis commissioned by the FBI shortly before agents went digging for buried treasure suggested that a huge quantity of gold could be below the surface, according to newly released government documents and photos that deepen the mystery of the 2018 excavation in remote western Pennsylvania.

Indiana police disclose cause of death of young boy found in a suitcase. They are still trying to identify him

An unidentified child who was found dead in a suitcase last month in southern Indiana died from electrolyte imbalance, officials said Friday.