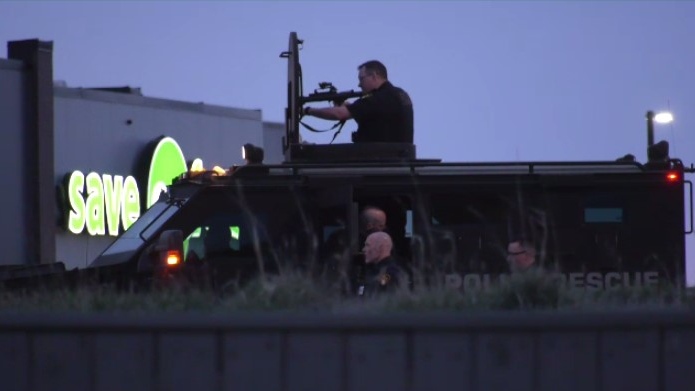 A man has been charged following a standoff in the city's Blairmore neighbourhood.

Several reports came in Sunday evening concerning a man who was carrying a gun, according to Saskatoon Police Service (SPS).

"Officers responded and located a man who was uncooperative with police and brandishing a firearm in a manner that was threatening to himself," SPS said in a news release.

Traffic restrictions were out in place as police worked to deescalate the situation.

After roughly an hour, as the man continued to disobey commands, SPS said officers took him into custody using "less lethal options."

A 42-year-old man faces eight weapon-releated charges and a mischief charge in connection to the incident.

Canada's chief of defence says Russia's invasion of Ukraine is going to change the course of history.

G7 leaders opened their summit Sunday with a discussion about shaping the global economy at a time when conflict and unrest are driving up prices and access to key goods around the world.

Russia strikes Kyiv as troops consolidate gains in the east

The latest on the G7 summit: The Group of Seven leading democratic economies has formally launched at its annual summit a global infastructure and investment partnership aimed at pushing back China's influence in the developing world.

David Cohen has been the United States' Ambassador to Canada since November 2021, and in the time since, both Canada and the United States have experienced a series of shared challenges. In an interview at his official residence in Ottawa, Cohen opens up about the state of the relationship.

Norway's prime minister and members of the royal family joined mourners at a memorial service Sunday at Oslo Cathedral for the victims of a shooting attack as the capital held its annual LGBTQ Pride festival.

As Senate-confirmed justices end Roe, how will voters react?

Republicans are heading into a November midterm election that is poised to swiftly become a referendum on the court's decision to overturn Roe v. Wade, as voters decide which party should control Congress

People with COVID-19 can infect and sicken cats and dogs by cuddling them: study

Cat and dog owners who cuddle their pets when infected with COVID-19 could end up making the animals sick with the virus, according to a Canadian study.

Rate of extreme rainfall expected to increase dramatically by 2100

New research looking at the frequency of heavy rainfall across the globe shows that a drastic increase in downpours is expected over the years to come.