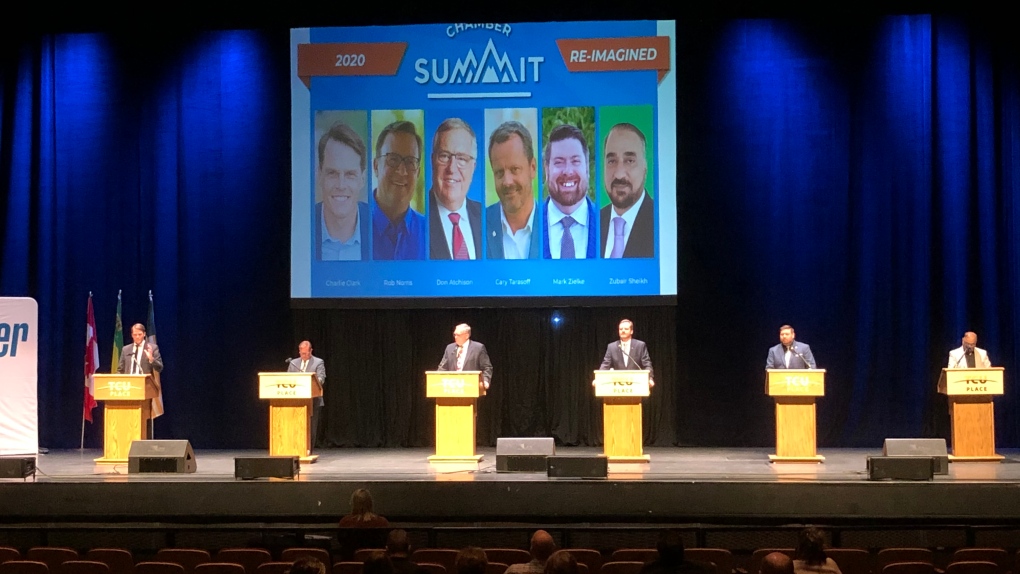 SASKATOON -- For the first time in the civic campaign, all six candidates for mayor of Saskatoon were on the same stage on Wednesday: incumbent Charlie Clark, Rob Norris, Don Atchison, Cary Tarasoff, Mark Zielke and Zubair Sheikh.

Downtown safety and the issue of the Lighthouse, recovering the economy through the COVID-19 pandemic, partnership with Indigenous people and organizations, and “mega projects” like a new library and bus rapid transit were brought up most frequently.

“We’re driving the provincial economy, we can do many things together, building on the strengths of what we’ve been doing through COVID so far,” said Clark on helping the city’s local economy recover from the pandemic. “To support businesses to succeed, support local, and come out of this even stronger on the other side.”

“We should be connecting this city to Europe, London, England, so the major companies will come forward to establish their head offices and exploit mineral rich, and natural resources rich Saskatchewan,” said Sheikh.

“People are struggling,” said Atchison. “Each household, each business in this community, I’ll tell you right now, they’ve had to make hard decisions along the way. And just because the government is a monopoly and has the right to increase your taxes, doesn’t make it right.”

“I proposed five different separate locations for The Lighthouse,” said Zielke. “Not as a place to move the entire Lighthouse or to get people out of our community, but rather to gather around these folks one on one, and bring them into our community and make sure that they understand that they are valuable as citizens and as taxpayers in Saskatoon.”

“We need to change free infill housing. When you create a wasteland and you’ve got abandoned houses and derelict buildings, you don’t have a whole bunch of eyes watching what’s taking place in the community,” said Tarasoff.

“If we had infill development, and houses, and people that are more respectful of their properties, we would have more eyes, they would call the police more. Right now crime is least reported in Caswell Hill and the Pleasant Hill area, and that needs to change.”

The civic election in Saskatoon is Nov. 9.