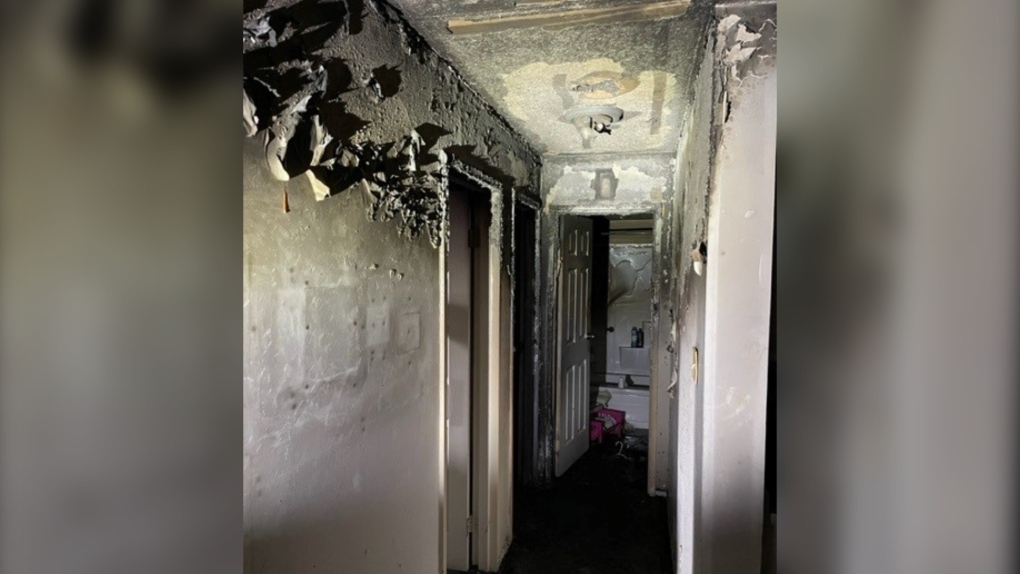 The Saskatoon Fire Department evacuated a condo building in the Wildwood neighbourhood while responding to a condo blaze an investigator has deemed suspicious.

Firefighters were dispatched to the 800 block of Kingsmere Boulevard around 5:11 a.m. on Sunday morning, according a news release from the city.

Flames were visible coming from the window of a ground floor suite when first responders arrived, the news release said.

A man was trapped in the bedroom of the suite, but managed to escape through the window.

The smoke alarm in the suite was going off, and the fire alarm was ringing throughout the building.

The fire department said all 28 suites were checked to ensure residents had evacuated, and the fire was brought under control by 5:41 a.m.

Firefighters ventilated the building to clear out smoke and carbon monoxide, with people returning to their suites by 6:30 a.m., the news release said.

An investigator concluded the fire was deliberately set in the hallway of the suite, trapping the man inside the bedroom. They estimated the cost of damages to be around $35,000.

Seven people were killed in two related shootings Monday at a mushroom farm and a trucking firm in a coastal community south of San Francisco, and a suspect was in custody, officials said.

'A toxic chemical that kills': WHO says health of 5 billion people at risk from trans fat

Five billion people are at an increased risk of heart disease and death due to trans fat, according to a new report from the World Health Organization.

An Air Canada customer who tracked her husband’s lost luggage to a public storage facility in Etobicoke, Ont. has been reunited with the bag four and a half months after it went missing. But her search for answers isn't over.

In the process of conserving a 17th-century painting by Dutch master Rembrandt, scientists have isolated an unexpected chemical within the paint, shedding light on some of the techniques used to create ancient masterpieces.

The Canadian military has concluded on the balance of probabilities that Maj.-Gen. Dany Fortin 'did not engage in sexual misconduct' after the senior military officer was acquitted of sexual assault late last year.

Intergovernmental Affairs Minister Dominic LeBlanc says the federal government is aiming to have long-term funding agreements inked with the provinces and territories ahead of presenting the 2023 federal budget.

A Toronto-based lingerie company, in partnership with cancer survivors and physicians, are launching a campaign to help raise awareness of how breast cancer could present in Black people and urge the federal government to recommend screenings begin at age 40 instead of age 50.

Canada's new guidance on alcohol is sparking plenty of debate, and while some experts say it could lead to frank conversations with health providers to help drinkers make informed choices, others are questioning the advice to imbibe fewer than two drinks per week.

Piles of waste accumulating in the Drina River in eastern Bosnia are turning the area into a floating dump.