The City of Saskatoon has outlined proposed property tax increases in its multi-year budget released Wednesday.

“As administration, we feel the proposed property tax is the lowest we could achieve without impacting service levels,” Hack told reporters during a virtual news conference.

This summer, city administration recommended higher property tax increases of 5.96 per cent and 5.42 per cent in 2022 and 2023 respectively.

To reach a lower property tax increase, adjustments were made to the Bus Rapid Transit project and the waste utility funding model.

The city has faced financial struggles due to the COVID-19 pandemic. For example, transit revenues are down as fewer people are taking the bus.

However, Hack said he’s confident the budget “manages the implications of COVID-19.”

City councillors will have the final say on the budget. A series of meetings is set to take place between Nov. 29 – Dec. 1.

The increase covers the cost to maintain and improve city services, according to administration.

The majority of property taxes would be allocated to the Saskatoon Police Service (SPS). About $23 of every $100 of municipal property tax is spent on policing, according to the proposed budget.

According to the multi-year budget, administration is suggesting the SPS will receive $119.7 million next year and $124.6 million in 2023.

The spending represents the largest portion of the city’s operating expenses at approximately 21 per cent. 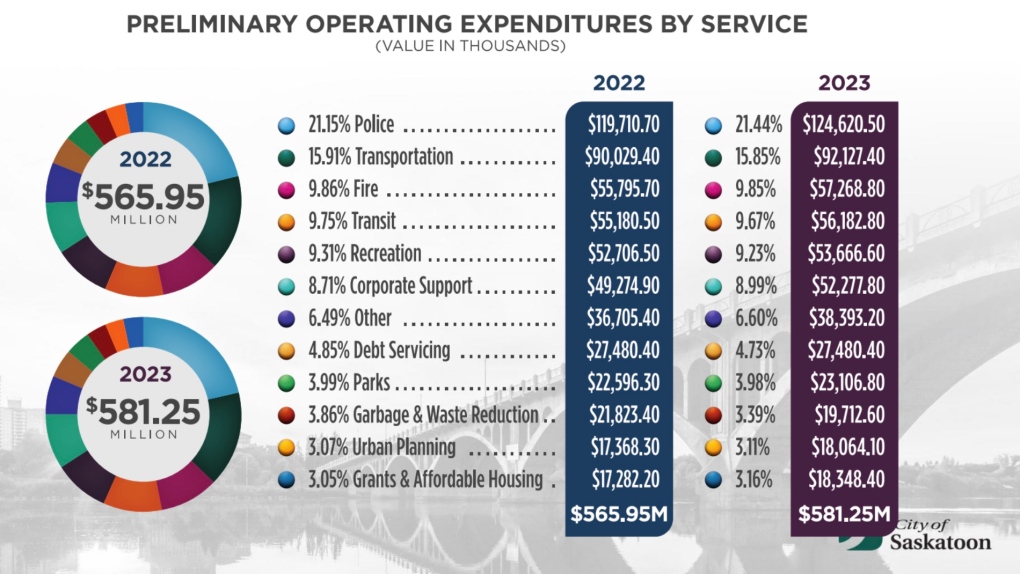 One of the new positions is a tech crimes special constable “which will help the SPS keep up with the growing and complex investigations where support is required,” according to the budget.

For the first time since 2010, a forensic identification constable will be added to the team.

The SPS has a target to have Indigenous people represent 14 per cent of its force.

Still, SPS identified it is on-track to meet its “representative workforce” goals.

In the budget, SPS outlines strategies to ensure officers are properly responding to the community’s changing needs.

Concerns about policing were addressed following the George Floyd killing in the U.S. and the resulting protests that followed.

SPS says it has a partnership with mental health services to pair a police officer with a mental health professional for certain calls.

Police also plan to continue a body camera pilot project and ensure officers receive de-escalation training, according to the budget.

After policing, transportation is receiving the second-highest portion of the city’s service spending with about 15 per cent, or $90 million, over the next two years.

Affordable Housing and Grants are getting the lowest amount of funding from the city with about three per cent, or $17 million.

The capital budget focuses on the long-term – covering the cost of construction or repairs to city assets such as bridges, buildings, roads and equipment.

Projects in the utility spending include: upgrades to electrical distribution, addressing the city’s stormwater assets, upgrades to the wastewater treatment plant and the construction of a new bioreactor. 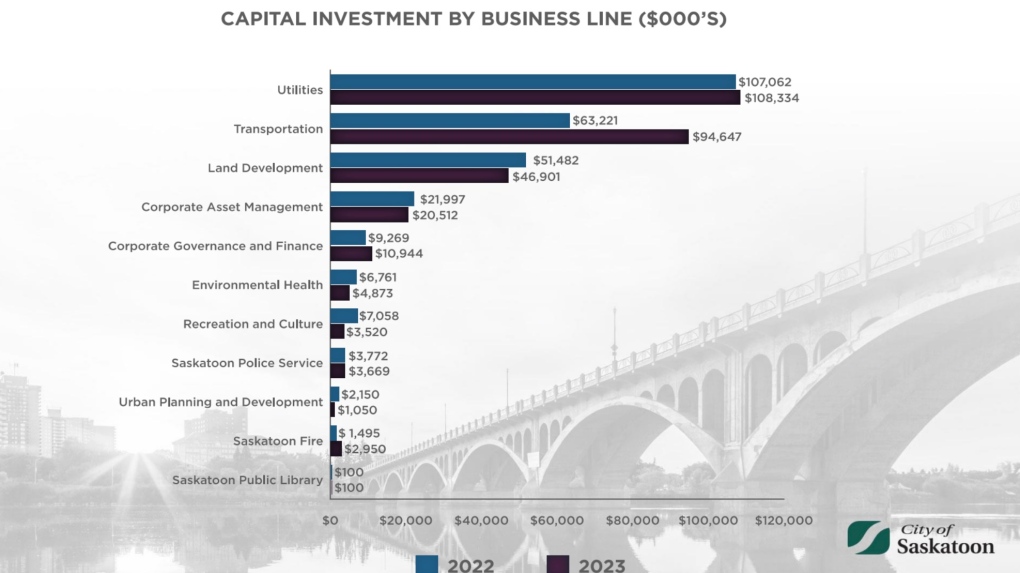 Transportation projects are allotted $63 million in the 2022 capital budget and $94 million the following year.

The bulk of the 2023 transportation spending, $46 million, is proposed to be spent on the Bus Rapid Transit (BRT) System.

Part of the BRT will be funded from provincial and federal governments, according to the city’s chief financial officer.

Other big projects the city is planning on investing in are roadway preservation and land development.

The majority of the capital budget, $450 million, is funded through reserves that the city has set aside.