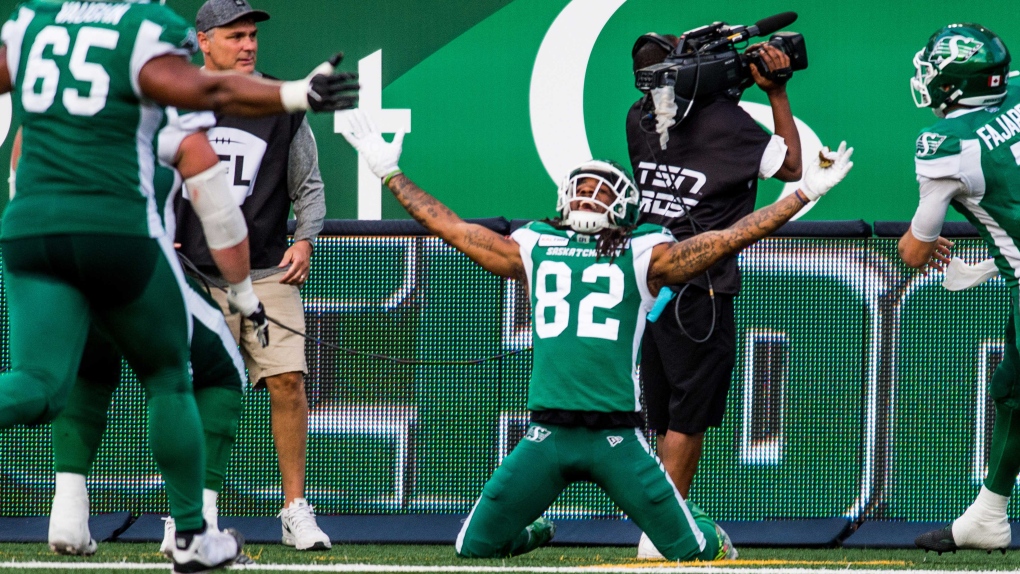 A 20-17 win over the host Calgary Stampeders on Saturday was a breakthrough of sorts for Saskatchewan Roughriders quarterback Cody Fajardo and head coach Craig Dickenson.

Fajardo went into the game winless in four career starts against Calgary, which was the only CFL club he hadn't earned a win against.

Dickenson earned his first win as Saskatchewan's head coach over the Stampeders, who are coached by his brother Dave.

"Winning here at McMahon, it's been tough," Fajardo said on a post-game media conference call. "I've got a lot of bad memories here.

"Most importantly, I think it's good because you guys won't be able to tell me that I've never beat Calgary again. So I'm going to take that to the bank, and that's going to feel good.

"That one was really for Coach Dickie, because he was in the same boat as I was, right? Obviously it's a little bit different because his brother obviously coaches on the other side," said Craig Dickenson: "I thanked the guys. I said now I can go home and have Christmas dinner and not have to sit at the kiddie table."

The Winnipeg Blue Bombers hammering the B.C. Lions 45-0 in another West Division game Saturday to get to 10-1 means the defending Grey Cup champions will host the division final Dec. 5.

By a quirk of the CFL schedule, Calgary is the only opponent the Roughriders have played so far in October interrupted only by a bye week.

The Stampeders took two games off Saskatchewan in early October to secure the season series, but Saskatchewan avoided a sweep with Saturday's win.

Calgary would rank higher in the standings in the event of a tie between the two clubs at the end of the regular season.

"I don't think it takes the pressure off of us, but I think there's a sense of relief we did finally beat Calgary and we can move on," Craig Dickenson said.

"And if we do see them again, at least have the confidence to know we can beat them if we play our best."

Trailing 10-6 at halftime Saturday, the Roughriders rallied with a pair of second-half touchdowns in front of an announced 21,672 at McMahon.

Fajardo completed 21-of-26 pass attempts for 222 yards. He threw touchdown passes to Brayden Lenius and Kyran Moore and was intercepted once.

Saskatchewan kicker Brett Lauther kicked field goals from 48 and 52 yards, but missed from 54 and 44 yards.

Calgary quarterback Bo Levi Mitchell was 21 for 31 in passing Saturday to become the Stampeders' leader in all-time completions.

Two of his three interceptions occurred in Saturday's second half, however, when Mitchell was also sacked four times.

"Being the quarterback, being the guy who touches the ball every play, I've got to perform better there," Mitchell said.

He threw a touchdown pass to Richie Sindani late in the fourth quarter. Ka'Deem Carey scored a rushing touchdown and Rene Paredes kicked a 12-yard field goal for Calgary.

"Passing-wise, I thought we were OK, I really did, beside the turnovers," said Dave Dickenson. "I just didn't feel like we did a good enough job in our run game."

With just under two minutes remaining in the game, Mitchell's 44-yard bomb to Shawn Bane put the hosts on Saskatchewan's 24-yard-line.

A four-yard scoring throw to Sindani on the goal-line, plus the convert, had the Stampeders trailing by a field goal with 48 seconds remaining.

Calgary's attempt to recover an onside kick failed, however, on a leaping grab by Saskatchewan's Duke Williams.

The Stampeders did have the ball for one final drive, but the Roughriders knocked the ball down on Mitchell's deep throw to preserve the victory

Saskatchewan's Jeremy Clark ran an interception back to Calgary's 13-yard line on the final play of the third quarter. On a third-and-goal, Fajardo threw to Moore in the end zone for a 20-10 lead.

The Roughriders led midway through the third when Fajardo found Lenius in the end zone with a 13-yard pass.

Isaac Adeyemi-Berglund fumbled a return in the first half's final seconds for Saskatchewan to recover. Lauther was wide on a 44-yard attempt, however, after success from 52 out on Saskatchewan's previous drive.

Lauther kicked a 48-yard field goal on the final play of the opening quarter for a 3-3 score. He then missed a 54-yard attempt early in the second.

Calgary converted a Branden Dozier interception on Saskatchewan's opening drive of the game into a 12-yard field goal by Paredes.

This report by The Canadian Press was first published Oct. 23, 2021