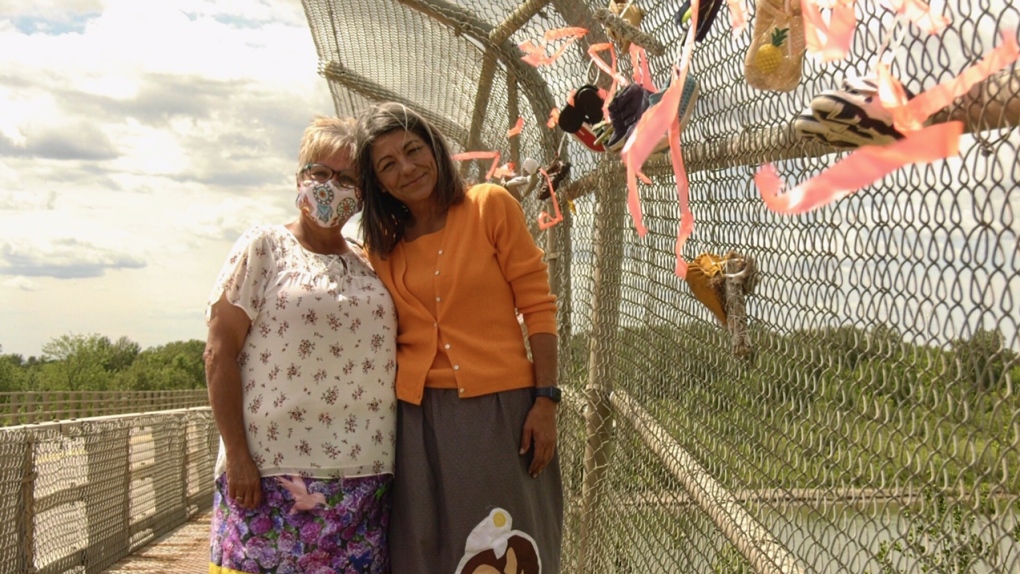 A woman from Saskatchewan’s Muskoday First Nation marked National Indigenous Peoples’ Day with a tribute to those affected by residential schools.

Ronalda Vandale gathered 215 pairs of children’s shoes to hang on the Muskoday bridge on Monday. The shoes represent the remains of 215 children found last month at a former residential school site in Kamloops, B.C., but further ground radar searches have revealed many more unmarked graves.

“I often asked her about her experience at residential school, but she would never share it. She would always tell me the same thing, over and over again: ‘It was just school,’” she said.

Almost a year ago, Vandale’s son died of an opioid overdose in Vancouver. She joined the Canada-wide advocacy group Moms Stop the Harm.

The organization hung hundreds of shoes on a Vancouver overpass to remember victims of substance use, so Vandale decided to carry on that initiative to remember residential school students who never returned home.

It also helps people grieve those losses, she said, when many traditional Indigenous ceremonies have been held back due to COVID-19.

“When we don’t have those ceremonies, those spirits just wander around, the elders told us,” said Vandale.

The community held a pipe ceremony on Saturday to remember and honour residential school children.

Vandale brought two pairs of children’s moccasins for her and Muskoday Chief Ava Bear to hang on the bridge on Monday.

“You can see the impact that it makes. It was very emotional this morning tying the shoes because you think about all of those children who never made it home, all of the parents who probably never knew what happened to their children,” said Bear.

And, as much as it hurts, Bear said the truth behind residential schools is still being revealed through searches of former sites.

“Many people think this is just the tip of the iceberg – There will be more.”

Alberta Health Services has issued an enforcement order against a Banff home after an inspection discovered that as many as 42 people were staying inside the property, saying the maximum number of occupants of the facility 'was exceeded.'

Summer of heat waves: A list of some temperature records broken in Canada this year

Canada's summer of heat waves continues this weekend, with warnings issued in four provinces. CTVNews.ca looks at some of the heat records broken already this year in Canada.

How Biden's new approach has led to legacy-defining wins

Over five decades in Washington, Joe Biden knew that the way to influence was to be in the room where it happens. But in the second year of his presidency, some of Biden's most striking, legacy-defining legislative victories came about by staying out of it.

The Montreal Canadiens haven't brought the Stanley Cup home since 1993 -- but a very convincing replica is sitting in a garage in Boisbriand, Que., about 35 km northwest of Montreal.

When schools in one North Carolina county reopen later this month, new security measures will include stocking AR-15 rifles for school resource officers to use in the event of an active shooter.

A two-year-old child from Regina has been found safe, following an alleged abduction and Amber Alert.