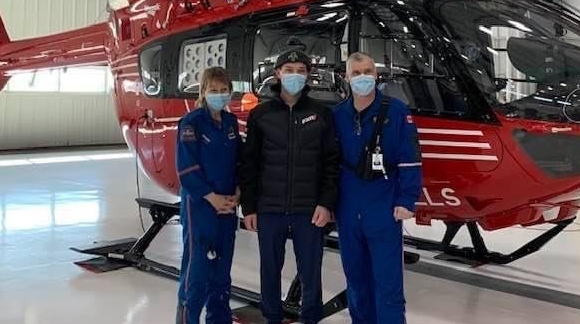 SASKATOON -- A teenager hit by a car while helping a stranded driver has donated $9,200 dollars to STARS.

On Jan.14 Morgan Miller was struck by an oncoming vehicle on Highway 11 while trying to pull another vehicle out of the ditch with his truck.

He was rushed to Royal University Hospital by STARS for treatment. Has released from hospital on Jan. 28.

Most of the money Miller is donating was raised through a GoFundMe created shortly after he was injured.

In an interview from Jan. 28 Morgan's father Brendan Miller said, “there’s just no better place for that money to go than to support STARS ... STARS was part of the integral group that if it wasn’t for them, Morgan wouldn’t be going home today.”

Brendan tells CTV News Morgan will be going back to school for the first time since the accident on Tuesday.