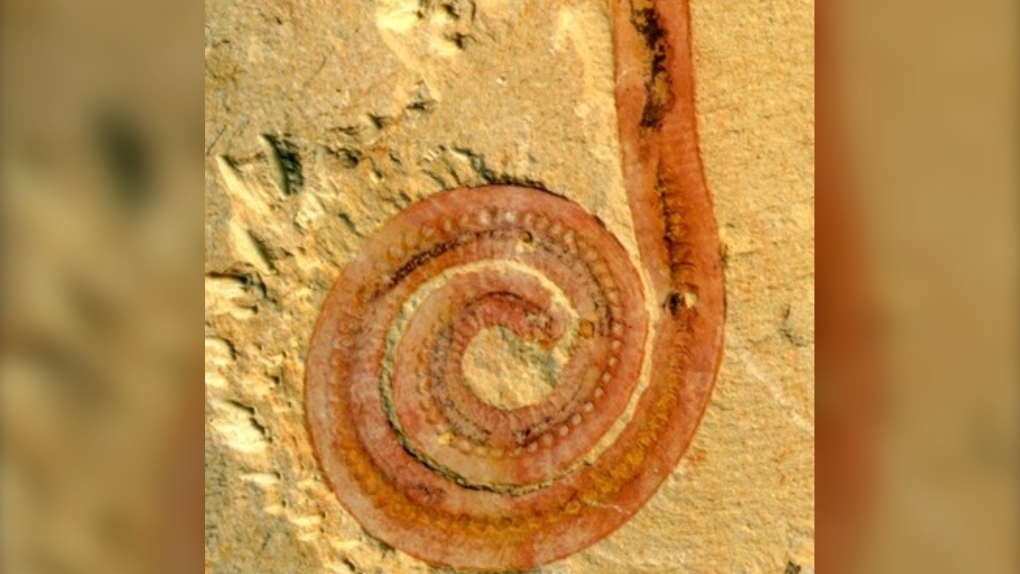 A fossilized worm found in the Chengjiang Biota. (Xiaoya Ma)

A new paper co-authored by University of Saskatchewan researchers shows the creatures responsible for one of the world's oldest and most complete fossil records lived more turbulent lives than previously thought.

The group of fossils — known as the Chengjiang Biota — deposited in Yunnan, China is 518 million years old.

The fossils are considered "the most complete snapshot of Earth's initial diversification, the Cambrian Explosion," says the paper, recently published in Nature Communications.

The marine fossils provide a glimpse into a time when life on Earth was undergoing dramatic changes.

"What we have here is sort of a snapshot of those really diverse communities that were evolving in shallow marine environments, around 520 million years ago," University of Saskatchewan geology professor Luis Buatois said in a phone interview.

Buatois is one of the paper's co-authors.

"We can call them worms in general, then there is a wide variety of arthropods, including trilobites, that were extremely common in what we call the Early Palaeozoic," he said.

"Even some of the earliest vertebrates were there; so what we are talking about here is what we call the Cambrian Explosion — which is the rapid appearance of the basic body parts of most animals."

While the fossils themselves have been extensively studied, the researchers focused on the environment where the creatures lived, previously believed to be a relatively stable, deep-water environment.

However, the researchers found this was far from the case.

By analyzing a core sample from the area, the research team found the animals were instead swept deep into the ocean from a river delta — a more challenging, unpredictable habitat, according to Buatois.

"They had to be able to survive there and that's kind of a big departure from previous ideas," Buatois said.

"The animals have to live with a series of stress factors, like for example, very rapid sedimentation, discharges of freshwater, or water turbidity."

The research team's findings offer fresh insight into the lives of animals that were entombed long before dinosaurs ever walked the Earth.

"When you are working with fossils, you need to first understand where they are preserved and then you have to evaluate if they have been transported or not," Buatois said.

"It seems these animals that we have always thought were adapted to a very stable low-energy environment — they were actually living closer to the shoreline."

By applying the team's methods, Buatois said long-held notions about other fossil sites could be upended as well.

"I don't think that we will end up reinterpreting everything as shallower water, but the picture that is emerging is that these sort of (animals) were actually living in a wide variety of environments."

A former police officer, the 86-year-old mother of Buffalo's former fire commissioner, and a grandmother who fed the needy for decades were among those killed in a racist attack by a gunman on Saturday in a Buffalo grocery store. Three people were also wounded.

A racist ideology seeping from the internet's fringes into the mainstream is being investigated as a motivating factor in the supermarket shooting that killed 10 people in Buffalo, New York. Most of the victims were Black.

A driver who struck and killed a woman and her three young daughters nearly two years ago 'gambled with other people's lives' when he took the wheel, an Ontario judge said Monday in sentencing him to 17 years behind bars.

A jury trial is to begin today for a man and his son who are accused of killing two Métis hunters.

One of Canada's most successful Second World War flying aces, James "Stocky" Edwards of Comox, B.C., has died at the age of 100.

Canadians welcome Prince Charles and his wife Camilla, the Duchess of Cornwall, as they embark on a three-day, travel-filled visit starting Tuesday. Between what senior government officials, Canadian Heritage, Rideau Hall and Clarence House have released, here's everything we know about the royal tour and its itinerary.

Amber Heard testifies Johnny Depp assaulted her on their honeymoon

'Aquaman' actor Amber Heard told jurors on Monday that Johnny Depp slammed her against a wall and wrapped a shirt around her neck during their 2015 honeymoon on the Orient Express.

A man opened fire during a lunch reception at a Southern California church, killing one person and wounding five older people before a pastor hit the gunman on the head with a chair and parishioners hog-tied him with electrical cords.

Scientists have found evidence that an underwater volcanic eruption in the South Pacific earlier this year, the biggest in decades, created pressure waves so strong they circled the planet multiple times and blasted through the Earth's atmosphere.