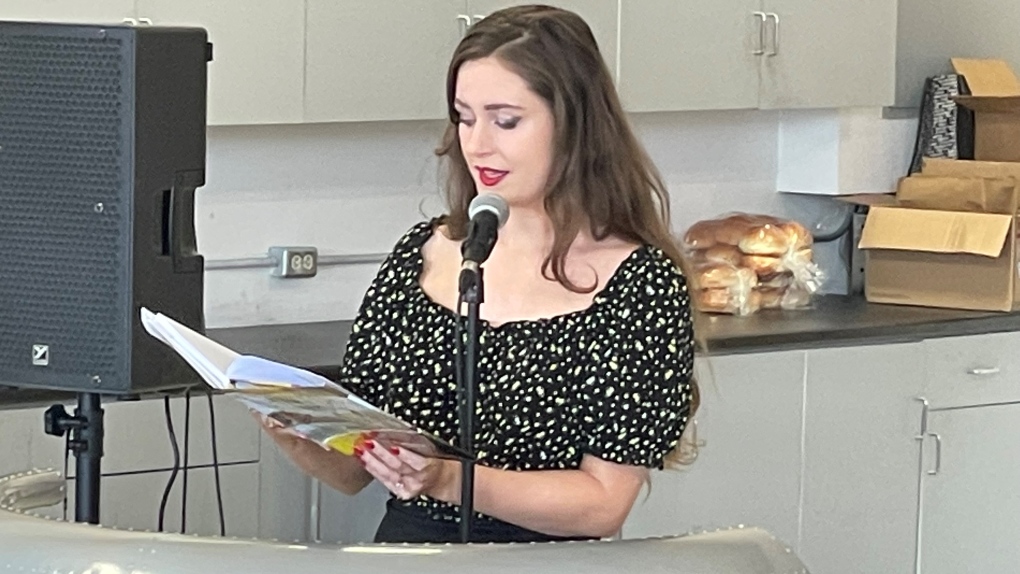 Author Victoria Hetherington reads a passage of her book, Into The Mist at the Saskatchewan Aviation Museum on Saturday. (John Flatters/CTV News)

Into the Mist: Finding CF-JDO is the story of Flight Officer Raymond Gran and Conservation Officer Harold Thompson, who set out on a mission in a Cessna 180 on August 20th.

More than 60 years later, attempting to find her missing father, the pilot’s daughter Linda managed to locate the plane whose disappearance became a Saskatchewan legend.

The book tells the story of the pilots' spoken accounts of life in Canada’s north and the lengths one family went to find their loved ones.

Author Victoria Hetherington launched the book at the Saskatchewan Aviation Museum in Saskatoon on Saturday, where a replica of the plane that went down is on display.

Seeing the sonar image of the plane that was located in 2018, Hetherington was compelled to learn more.

“I can remember it like it was yesterday,” she said. “I saw the sonar image of the plane, and it shows kind of an intact plane 57 feet down. And I thought: I’ve got to tell this story.”

The author said meeting Gran's daughter Linda showed how strong a family bond can be.

“How tenacious familial love can be,” she said. “Linda never met her dad. The plane disappeared in 1959 and yet, six decades later, she says we are going to get whoever it takes, a team and we're going to find this plane,” said the Toronto-based author, who began working on the book in 2019.

“The research process took really long, but it’s one of those stories that you have to get right, and you also have to honour the fact that so many people do have a certain connection to this story.”

The CF-JDO 1959 Memorial exhibit is on display at the Saskatchewan Aviation Museum, honouring the lives of Ray Gran and Harold Thompson who served Saskatchewan in war and peacetime.

The body of a famed U.S. extreme skier who went missing this week after falling from the world's eighth-highest mountain was recovered Wednesday and transported to Nepal's capital.