Warning: Some readers may find these images disturbing.

Optometrists have responded to an increase of patients with complications due to eyeball tattooing and eye jewellery, according the Saskatchewan Association of Optometrists.

“This new legislation is a proactive decision to protect the public's vision and prevent unnecessary cases of injury and blindness.”

About two years ago, an Ottawa woman opened people’s eyes to the risks of the tattoo.

Catt Gallinger’s eye tattoo left her partially blind in September 2017. She said purple dye seeped from her eye immediately and her eye swelled shut the next day.

The new legislation, under the Health Hazard Regulations, was amended Jan. 31.

Even before the new rules came into effect, Ink Addiction Tattoos was already denying the service.

“I’ve never done it and I’ve never had someone even ask for that,” owner Jody Spychaj told CTV News.

“The first thing we learn as children is, ‘Don’t stick it in your eye.’ So to take a needle and poke it in your eye, seems like something you shouldn’t do. That alone would be my reason for not doing it.”

Spychaj said he only knows of one artist in Saskatchewan, in Prince Albert, who would do the procedure – which involves injecting ink into the white part of the eye.

He said he supports the new rules, which ban the sale of a scleral tattoo.

“I’m glad we have something in place that will keep people from making that decision.” 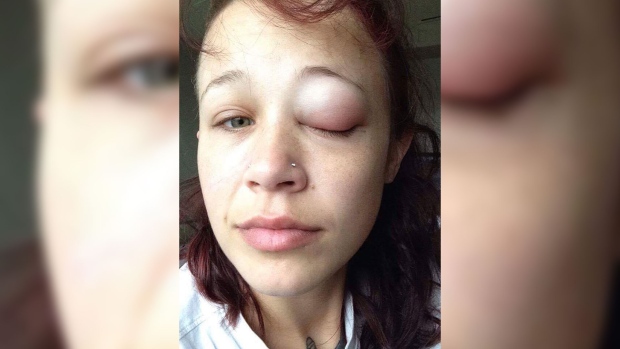