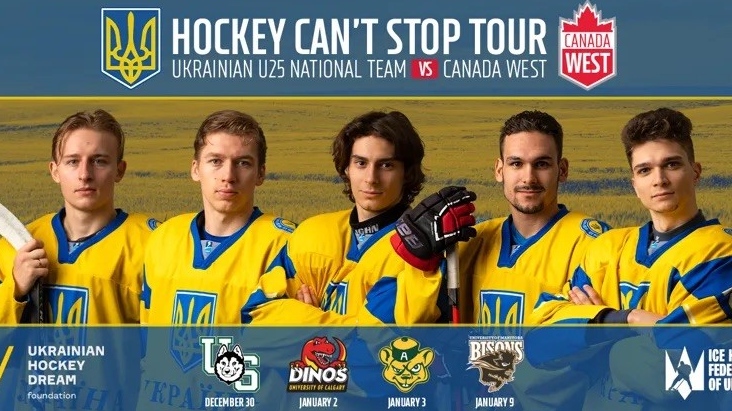 The Ukrainian national under-25 team will play a four-game series against Canada West opponents. (Supplied/Canada West)

The University of Saskatchewan Huskies mens hockey team will play host to the Ukrainian under-25 national team on December 30th.

It’s the first game in a series of four called the 'Hockey Can’t Stop' tour.

The Ukrainian team will play exhibition games against the Universities of Saskatchewan, Calgary, Alberta and Manitoba, with proceeds from ticket sales going directly to the Canada/Ukraine Foundation.

The tour provides athletes with a rare opportunity to leave the country and shift their focus from the danger of attack.

According to a release, most Ukrainian men between 18 and 80 are not allowed to leave the country without special permission.

Despite arenas in at least seven cities being lost or destroyed, the Ukrainian Ice Hockey Federation wants to send a message to the world that the country is persevering and strong.

Ukraine will play The U of C Dinos on January 2nd, followed by a trip to Edmonton to play the Bears on January 3rd. Their tour wraps up on January 9th against the University of Manitoba Bisons.

After the exhibition series, the Ukrainian team will participate in the Winter University Games in Lake Placid, NY from January 11-23.

After six weeks, more than 70 witnesses, and the submission of more than 7,000 documents into evidence, the public hearing portion of the Public Order Emergency Commission wrapped up on Friday.

Health Canada has issued a recall for an educational children's toy, which may contain above-legal amounts of lead.

Prime Minister Justin Trudeau made an appearance on Friday's episode of "Canada's Drag Race: Canada vs. the World" to offer the contestants words of inspiration before the main challenge.

A new study has confirmed the authenticity of an ancient Roman coin long considered fake but which researchers now believe depicts the image of a forgotten emperor.

Prime Minister Justin Trudeau gambled just by showing up. And he appears to have won in the court of reasonable public opinion, Don Martin writes in an exclusive column for CTVNews.ca.

'What if the worst had happened': Trudeau explains why he invoked Emergencies Act when he did

On the stand at the federal inquiry examining the federal government's invocation of the Emergencies Act, Prime Minister Justin Trudeau revealed candidly that a central factor in his historic decision to enact unprecedented powers to shut down the 'Freedom Convoy' protests, was his fear of what could happen if he didn't.

NASA's Orion capsule entered an orbit stretching tens of thousands of kilometres around the moon Friday, as it neared the halfway mark of its test flight.

A marriage annulment that removed a B.C. woman as a beneficiary from her ex-husband's pension plan has been cancelled after a judge determined an "imposter" had agreed to the terms in court.