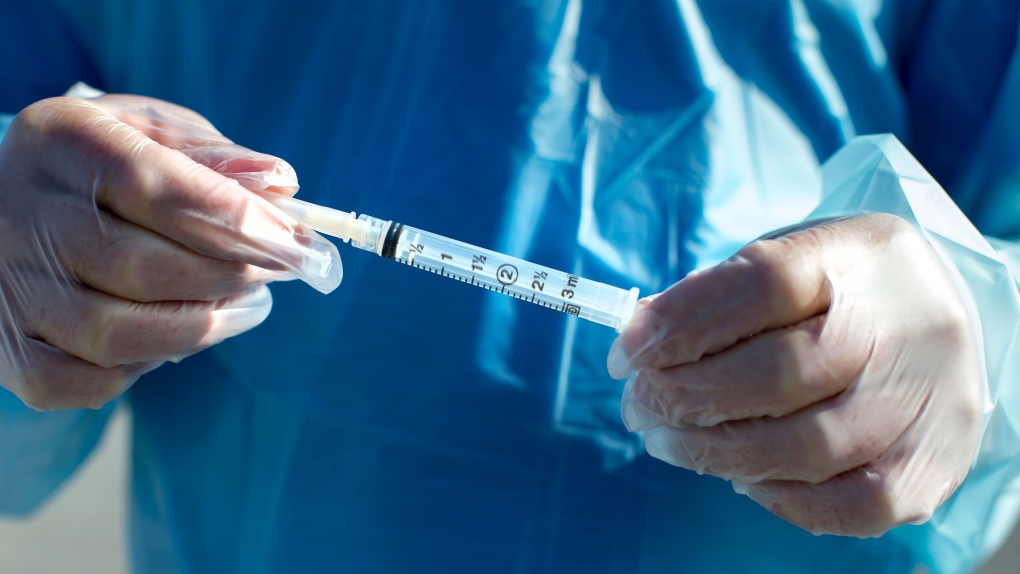 A needle and syringe used to administer the flu shot in shown in Virgil, Ont., Monday, October 5, 2020. THE CANADIAN PRESS/Tara Walton
Prince Albert -

The Saskatchewan Ministry of Health is urging people to get the flu shot to avoid more illness and stress on the health care system.

“We’ve ordered more this year in the anticipation that everyone is talking about vaccines (so) that they’ll be able to get the flu shot and the COVID-19 shot,” health minister Paul Merriman said, while speaking to reporters at the legsislature on Nov. 17.

Enough influenza vaccines have been purchased to immunize 50 per cent of the population, according to the health ministry.

The amount purchased is expected to meet demand based on flu vaccine uptake in previous years.

Merriman said about 30 to 32 percent of people “typically” get the flu shot.

There are currently approximately 227,000 doses available in public health offices across the province, including in pharmacies.

“People with both infections at the same time would once again overwhelm our health care system so we're really advised to do both COVID vaccines and flu vaccines on the same day,” said pharmacist Roses Stewart.

Stewart owns Victoria Square Compounding Pharmacy in Prince Albert and says their pharmacist will provide vaccinations for people in their cars if they are unable to come inside the building.

“We’re trying to make sure people don’t have to come to a health care facility more than once,” said Stewart.

She said the flu vaccine is made to protect against the most common influenza virus strains found in the southern hemisphere that are expected to spread north.

Flu shots can also be booked online through the Saskatchewan Health Authority website.

Stewart said she encourages people of all ages to get the flu vaccine to keep from spreading the virus.

“Elderly people aren’t able to mount as much of response to the vaccine so there’s a window where they could develop the flu or COVID symptoms even if they are vaccinated,” said Stewart.

Flu symptoms appear 1 to 4 days after exposure to the virus. Health Canada identifies symptoms of influenza as fever, cough, muscle aches and pain. Other common indicators are headache, chills, fatigue or tiredness, loss of appetite, sore throat and runny or stuffy nose.