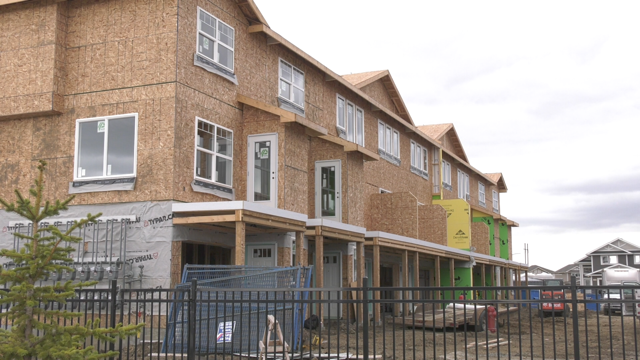 A home under construction in Saskatoon is pictured May 17, 2022. (Dan Shingoose/CTV Saskatoon)

A new report on housing in the province suggests there will be a significant deficit in housing units in the next eight years.

The report was released by the Saskatchewan Housing Continuum Networks, which is a collaboration between realtors, home builders and Habitat for Humanity.

With the provincial government planning to introduce 219,000 new residents by 2030, Saskatchewan will need to build 141,500 housing units to meet the projected population increase, the report released on Tuesday said.

“As long as we see our prices creeping up a little bit and our inventory going down, we have an increasing concern,” said Saskatchewan REALTORS Association CEO Chris Guerette.

If the province were to maintain the status quo, it would need 95,000 housing units, according to the report. It says the lack of homes for sale has become the market’s main issue in Saskatchewan.

“Over the past 30 years we’ve built just over 98,000 units, so we have to squish in roughly the same amount of units over a period of eight years which is significant for us,” Guerette said.

Mayor Charlie Clark says Saskatoon is competitive when it comes to affordability compared to other cities.

“It is still a challenging market for people to get into, especially if you’re lower income or middle income even,” Clark said.

The mayor says the city is trying to service as much land as it can as new housing is being built to meet the demand and reduce “the squeeze” that could lead to prices going up.

Interim CEO of the Saskatoon & Region Home Builders’ Association Silvia Martini says builders are reacting to what the market's needs are right now.

For example, Martini says more people are moving into multifamily dwellings instead of single-family homes due to affordability.

With the pandemic causing major supply chain issues across the country, it’s taking longer for builders to create homes. Martini says builders are even stockpiling supplies and holding onto them until it’s time to build.

“Where it would take an average, say four months to build from start to finish to occupancy to build a home, it’s going to take six and a half,” Martini said.

Canada handled key aspects of the COVID-19 response better in the first two years of the pandemic than most G10 countries, according to a new study by researchers from the University of Toronto, Unity Health Toronto and St. Michael's hospital.

Leading economic powers conferred by video link with Ukrainian President Volodymyr Zelenskyy on Monday as they underscored their commitment to Ukraine for the long haul with plans to pursue a price cap on Russian oil, raise tariffs on Russian goods and impose other new sanctions.

After years of playoff disappointments, the Colorado Avalanche are back atop hockey's mountain with a 2-1 Game 6 win against the two-time defending Stanley Cup champions Tampa Bay Lightning.

With a speech about his own inspirational dream for the Black community, Sean 'Diddy' Combs channelled the spirit of the Rev. Martin Luther King Jr. while accepting the BET Awards' highest honour Sunday night.

Canada pledged $50 million to prevent Ukrainian grain from going to waste on Sunday as Prime Minister Justin Trudeau committed to work with G7 nations on further measures to halt the famine caused by the Russian invasion of the embattled country.

Behind prison walls, National Indigenous People's Day was celebrated this month, with inmates at a Manitoba federal prison granted access to music, drumming and sharing circles — positive steps forward to reconnect Indigenous inmates with their culture and rehabilitate a group that is incarcerated at a disproportionate rate.

Hundreds of thousands of people lined the streets of downtown Toronto on Sunday as the city's Pride parade returned for the first time in two years.

A Dalhousie University team of scientists — in a joint venture with a company called Planetary Technologies — is now in the next phase of their research to use the power of the ocean to one day reduce the world’s carbon levels.