Sask. dog lost in snowstorm dug a burrow and survived for days

SASKATOON -- A Saskatchewan woman has been reunited with her dog after he went missing Sunday afternoon  in the snowstorm.

After losing her dog, Julia Neufeldt said she was heartbroken and thought she might never see Louie again.

“I felt so hopeless, I felt he’s never going to turn up. I just remember sobbing, the wind was blowing around, getting hit in the face by ice pellets,” Neufeldt said.

“I thought ‘there’s no way, he’s gone.’ I have no idea where he went, I felt like we were looking for a needle in a haystack.”

Neufeldt and her family searched Chief Whitecap Park where Louie went missing, but with the blizzard-like conditions on Sunday, they had to call it a night after finding no signs of him.

She said she barely got any sleep that night, worried about her dog and considering the worst.

“I was convinced that he fell in the river. I tend to go to the worst case scenario, but I wanted to prepare myself for the fact that he might not come back.” Neufeldt told CTV News.

Friends and family began joining in the search and soon, word got out on social media, compelling complete strangers to help look for Louie.

Neufeldt spent the next few days searching parks in the area, knocking on doors and telling anyone who would listen about Louie and what he looked like.

“I got a phone call from Animal Control, some guy said ‘there’s a gentleman at Furdale Park that spotted a dog. He’s with the dog right now and it fits Louie’s description,’” Neufeldt said.

She said she tried not to get her hopes up too much until the man sent her a picture of her Louie, then she began to run. 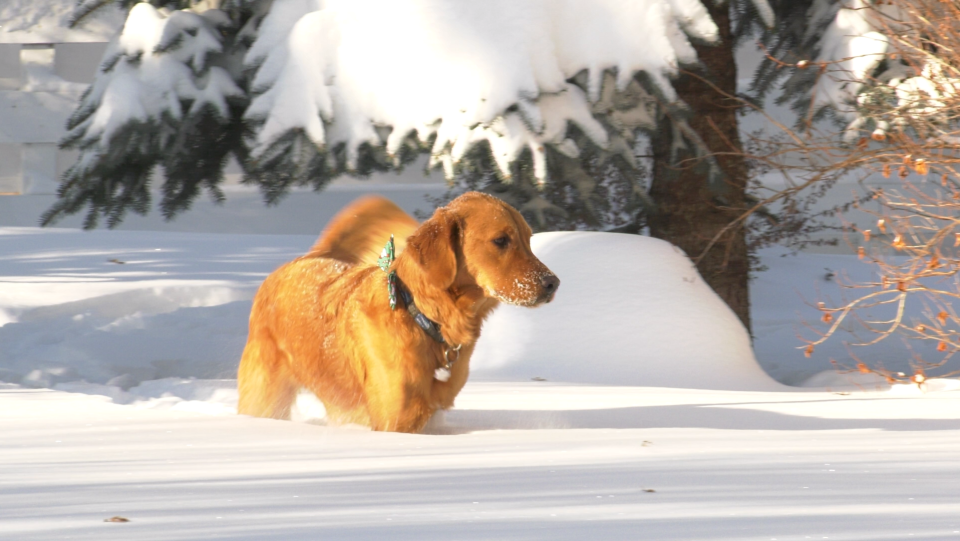 “I started bawling, and of course we were on the opposite end of where he was, so we sprinted through the snow,” Neufeldt said.

“It took us about a half hour to slog through the snow and I felt like I was going to have an asthma attack.”

A cross country skier was passing by with his dog when he thought he saw a porcupine and started skiing away from it before realizing that it was Louie, in a burrow that he had made for himself.

Neufeldt said that Louie dug himself a cave in the snow, something that may have been the reason he survived for more than three days in the cold.

“I started crying cause I was so excited, I felt like I was in disbelief, like this can’t be real.”

Neufeldt said she is beyond grateful to the man who found Louie with the help of his own dog.

“He was just out with his pointer, and if it wasn’t for the dog, we wouldn’t have found Louie,” Neufeldt said.

Now that Louie is home, his family is going to take extra steps to make sure he doesn’t run off again.

Finding Louie and realizing what she could have lost has helped Neufledt find a new appreciation for Louie.

“I was dealing with a new baby and Louie was a young dog and I was very frustrated a lot,” Neufeldt said.

Neufeldt said that she is very appreciative for all the help and support that came from friends and family, and wants to thank everyone who helped her in any capacity.