Sacred fire burns around the clock for MMIWG national inquiry 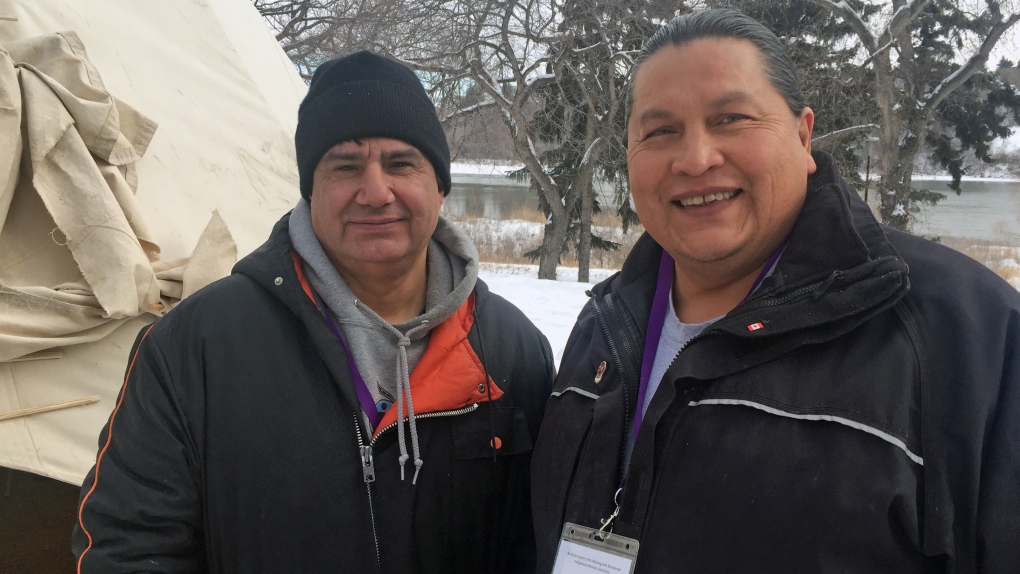 Firekeepers Ralph Arcand, left, and Alvin Baptiste pose for a photo near the South Saskatchewan River in Saskatoon. The two have been tending to a sacred fire burning inside a teepee since the missing and murdered Indigenous women and girls inquiry started Monday. (Angelina Irinici/CTV Saskatoon)

A sacred fire is continually burning across the street from where the national inquiry into missing and murdered Indigenous women and girls is being held in Saskatoon.

The fire has been burning in a teepee near the South Saskatchewan River on Spadina Crescent since the inquiry started Monday and will burn until the inquiry is complete Thursday.

Firekeepers tend to the fire around the clock in eight-hour shifts.

Firekeeper Alvin Baptiste said in Indigenous culture the fire is a spirit and cannot be photographed. He explained that it listens to prayers and the testimony at the inquiry and sends them up to the Creator through the smoke.

“The reason why we got that fire going is because to listen to the people that are crying inside (the hotel) and listen to the families that are coming forward in this inquiry,” Baptiste said.

The firekeepers keep the door to the teepee open to allow anyone to enter. It’s customary to make an offering of tobacco before. Firekeepers smudge those who enter. They also provide tobacco so one can pray and offer it to the fire. Baptiste explained it’s important people understand the connection between the earth, plants, animals and the elements. He said lighting the fire comes first in Indigenous ceremony.

“It’s a commitment doing this -- keeping this fire. We are offering our time and making sure we keep this fire in a clean matter and to respect this fire,” Baptiste said, adding he wants the next generation to learn more about the meaning of fires.

The national inquiry made five stops before it landed in Saskatoon this week. Ashes from each sacred fire get passed on to the fire in the next city hosting the inquiry.