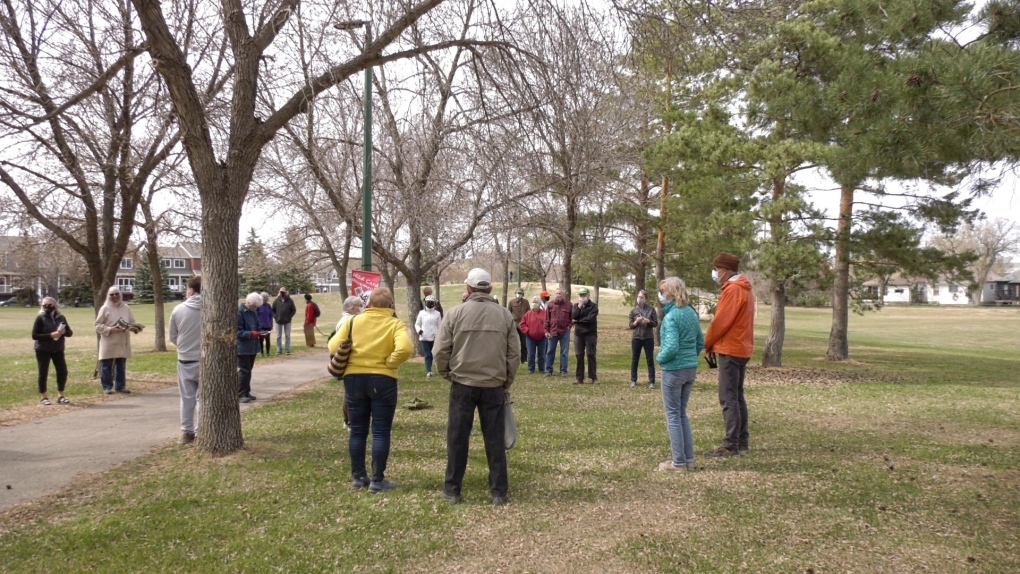 Riversdale residents gathered for a physically distanced "save our park" event in Optimist Park on Saturday. (Miriam Valdes-Carletti/CTV News)

SASKATOON -- Riversdale residents gathered for a physically distanced "save our park" event in Optimist Park on Saturday.

"There's gonna be too much traffic, too much noise, too much fencing. It's a very peaceful spot and it's not even being in the park, it's seeing the green space that actually helps," said Wanda Martin, who's a resident in the area.

The event featured a tour of the park where it took people to four different stations to learn about the parks' history and significance of the decades old trees.

Several signs saying "save our park" were posted on trees as well.

Martin says she's happy with the turnout at the park and how the community has become engaged in coming up with alternative ideas for the school.

Residents say the area already has a lack of green space and adding a school would cut it in half, adding there's several other areas that would be more fitting for the school.

"The thought of losing half of this park is very challenging for the people in the neighbourhood," said Karen Farmer, another resident in the area.

"It's gonna change the whole dynamic of the neighbourhood in a negative way we feel because we really rely on this park year round for our physical and mental health and when a school comes here, it'll change that significantly."

Residents are hoping to have their voices heard as a decision could come May 11 at the school board's meeting.