‘Right in the middle of the bike trails': Illegal dumping suspected in outskirts of Saskatoon 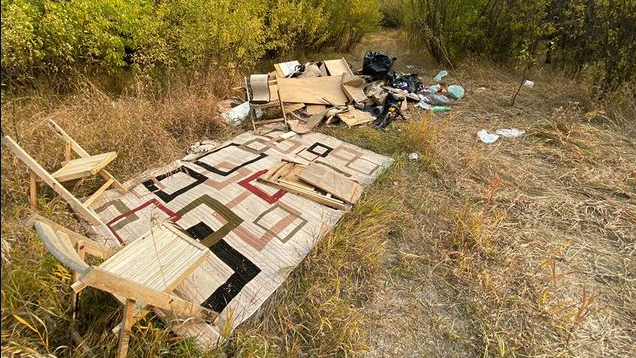 A Saskatoon man wants to bring attention to illegal dumping at the bike trails adjacent to the southwest off-leash dog park. Submitted by Michael Smith

That’s what Michael Smith and his children rolled up to while riding through the biking trails near the City of Saskatoon’s southwest off-leash dog park.

He’s part of Saskatoon’s growing fat-bike community and he said he’s recently noticed an increase in the amount of illegal dumping happening on the bike trails in the outskirts of Saskatoon.

“In the last few months that I’ve been biking there, there’s couches being discarded, beds and recently a whole (lot) of household garbage, garbage bags torn open by raccoons or squirrels, and it’s right in the middle of the bike trails and it seems there’s a little bit complacency,” Smith said. “I try to raise awareness through social media.”

Smith added the trails usually see an uptick in users riding fat-bikes in the winter, and with much of the trash and debris landing in the middle of the trails, the potential for noticing hazards on the trail increases with a blanket of snow.

He said he wants to see the City of Saskatoon, SaskPower and CN Rail come together and try and figure out a way to keep vehicles from accessing the trials.

“It seems there’s a few players involved when it comes to the surrounding property,” Smith said. “So I feel like they all need to work together to put up concrete blockades so vehicles can’t get in, or fencing … it’s wide open so anyone can stroll in.”

CTV Saskatoon reached out to the City of Saskatoon on Sunday for comment but did not get a response.