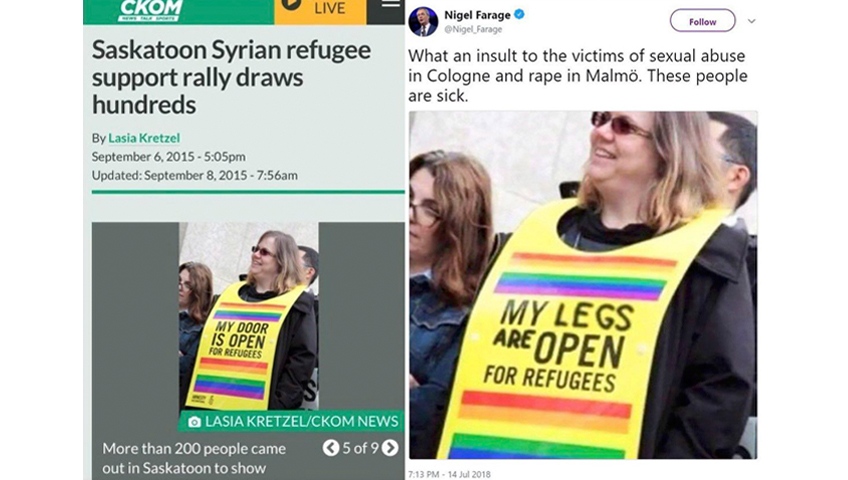 An altered photo tweeted by Nigel Farage, the former leader of the UK Independence Party and a member of the European Parliament, along with a version of the original from the CKOM website are shown in this handout combination photo. Vancouver radio reporter Lasia Kretzel says people on social media, including a vocal British politician, should be more careful about spreading fake news. THE CANADIAN PRESS/HO - Lasia Kretzel

A Vancouver radio reporter says people on social media, including a vocal British politician, should be more careful about spreading fake news.

Lasia Kretzel was working for CKOM in Saskatoon in 2015 when she attended a rally supporting Syrian refugees.

She wrote a story about the rally and snapped a photo of a woman with a sign around her neck that read: "My door is open for refugees."

The same photo is circulating again on social media, but with the sign changed to: "My legs are open for refugees."

Kretzel says the altered photo was tweeted on the weekend by Nigel Farage, the former leader of the UK Independence Party and a member of the European Parliament.

Kretzel called out Farage on Twitter, saying she had taken the original photo, and he acknowledged the sexualized picture as phoney.

"The photo turns out to be Fake News, but the refugees welcome brigade need to think harder about what is happening," Farage later said in a tweet that Kretzel saved in a screen grab.

The photo was no longer on Farage's page on Monday.

Kretzel said she had seen the altered photo on the internet before, but didn't speak out about it until she noticed someone prominent touting it as real. Farage has 1.2 million followers and his post was retweeted several thousand times.

"It sucks when you see your own image used in a false way," said the 29-year-old. "With the amount of time and work that we put into gathering real information and, in an era of fake news ... this doesn't help the discussion."

She said she doesn't know the woman in the photo but feels for her.

"I don't know if she's aware that her image is being shared, and that honestly makes me feel bad."