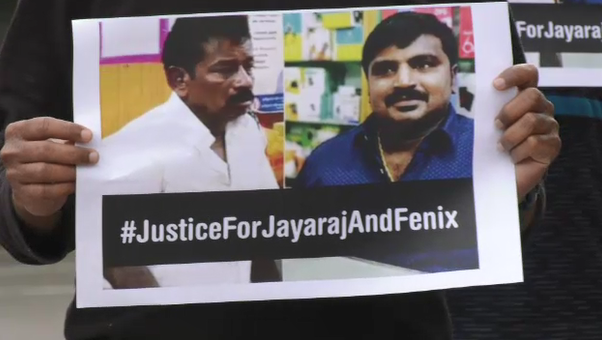 The men known as Jayaraj and Fenix are shown on a sign at a protest in Saskatoon on June 28, 2020. (Ethan Butterfield/CTV News Saskatoon)

SASKATOON -- A small protest was held Sunday in Saskatoon in response to the deaths of two Indian men, known as Jayaraj and Fenix, while in police custody in India.

About 15 people gathered around the Mahatma Gandhi statue near 21 St. and 3rd Ave. Sunday morning.

Organizers gave a speech and held a moment of silence for the pair, who died on June 23.

The protest originated in India and has now garnered global attention.

"The government and the political system has to look into this, and they have to come up with the right solution," said Karthic Rajamnickam, who was part of the protest. "This should not happen anywhere, in any part of the world."

The protest ended in chants for justice.