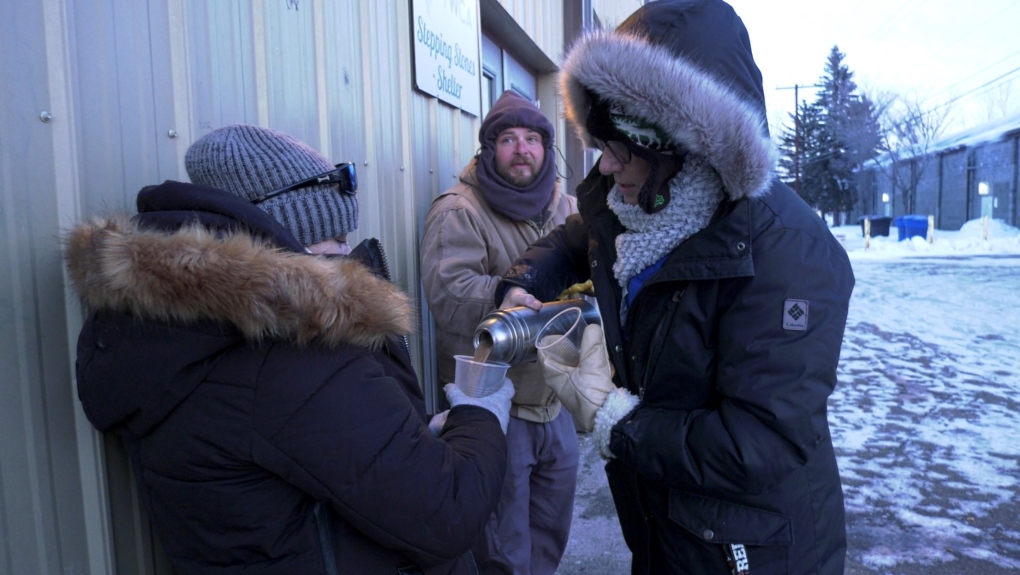 The manager of the emergency cold weather shelter in Prince Albert says the recent frigid temperatures have brought twice as many people to the Stepping Stones Shelter looking for a place to sleep.

“In the past we turned away maybe three or four a night and that was manageable. This year, however, it’s a different story and we are seeing a large turn away number,” said YWCA Prince Albert’s CEO Donna Brooks.

On Monday night for example, Brooks says the 20 bed Stepping Stones Shelter was full and 19 others were left in need of a place to sleep for the night.

Prince Albert’s chapter Mobile Crisis Services was called and they worked to find alternative places for people to sleep, such as hotels or with friends or family.

On Tuesday, with temperatures in Prince Albert dipping to -26 C, the Stepping Stones Shelter provided 20 people with beds for the night. In addition to that, five were given mats on the floor, five slept on chairs, three were sent to Our House and 11 people were left in the hands of Mobile Crisis. The shelter also provided food to another 13 people who did not spend the night.

Brooks says the YWCA Prince Albert has 38 beds for women and children, 12 for youth and 10 beds at the Our House Shelter that have also been running daily at full capacity.

The Ministry of Social Services says it works with community partners to help individuals in need of emergency shelter. It has a contract with Mobile Crisis Services to provide after-hours support on our behalf.

The acting executive director of income assistance service delivery Chad Ryan told CTV News in a statement that clients who accept emergency assistance from Mobile Crisis are required to connect with the ministry the following business day to request ongoing assistance.

Brooks says because some clients haven’t contacted the Ministry the following day, they’re jeopardizing their means of getting help. And she is uncertain of how those people will be accommodated in the future if they cannot get a space at a shelter.

“We can also support them in applying for income assistance benefits, and then work with them to develop a plan to connect to longer-term housing,” said Ryan.

Volunteers from several churches in the city and area have come together as, Reaching Out Street Ministry (ROSM), to help the homeless. Volunteers from ROSM come daily to the Stepping Stone Shelter to offer people lined up outside the shelter warm drinks and food. And they often allow people in their personal vehicles to warm-up.

“It’s a state of suffering. There’s nowhere to sit, no shelter from wind and it feels inhuman to leave people out here,” said Lacey.

In November, Prince Albert City Council approved hiring Chad Nilson with the Living Skies Centre for Social Inquiry to create Prince Albert’s Homeless Action Initiative. Nilson has created a forum and is tasked with devising a long term plan to help reduce homeless in the city.

Agencies in the areas of housing, mental health, addictions, policing, corrections, business representatives, Indigenous and provincial governments are part of the forum.

“We have to find out what’s causing it, where they’re coming from and who do we have to engage,” said Mayor of Prince Albert Greg Dionne. “A lot of people say it’s more about addictions and mental health than it is about homelessness.”

A launch of the Homeless Action Initiative is expected to take place in December to outline stakeholders, goals and timelines.

Brooks says insufficient income assistance support from the governments and the way support income support checks are delivered directly to clients instead of landlords has contributed to more people becoming homeless.

“A single person gets about $800 a month and out of that they have to rent a place, buy their food, etcetera, etcetera well that isn’t enough to do that,” said Brooks.

Brooks says they do encourage shelter clients to see if they are candidates for existing programs like Homes for the Homeless that helps homeless get assistance and enter into a guided renters program.

The Stepping Stones Shelter opened in November 2020 due to increased demand for shelter services. It closed in the spring of 2021 and reopened in October of 2021 with funding from the Ministry of Social Services.

On Wednesday, through the direction of the chief and council, opened a warming shelter and feeding station in the Union Centre called the Moose Lodge. It will be open weekdays from 10:30 a.m. to 4:30 p.m.