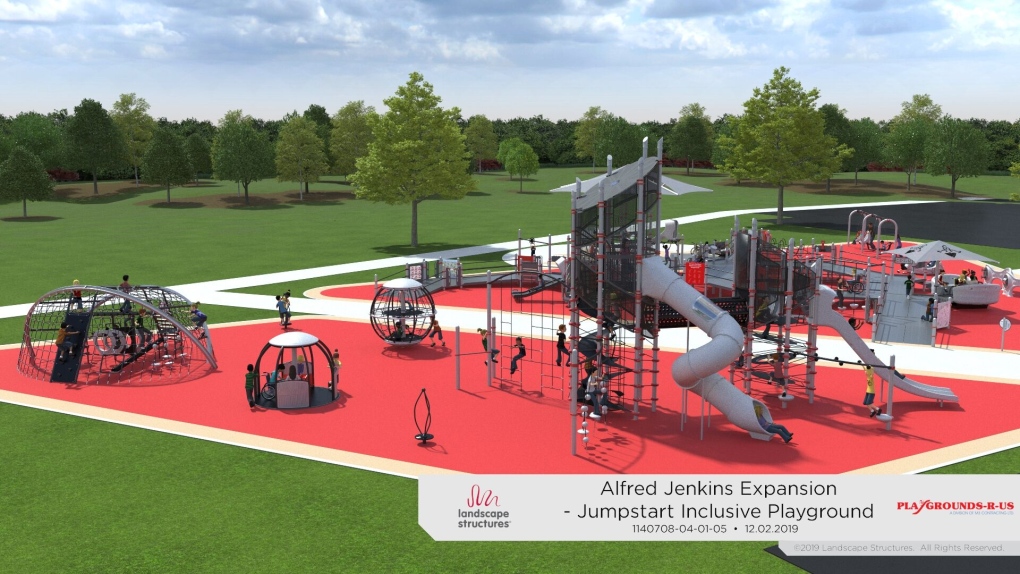 A concept drawing of a playground expansion in Prince Albert. (Submitted photo)

PRINCE ALBERT -- Prince Albert will have one of the largest playgrounds in western Canada after a donation from local business owner Malcolm Jenkins.

“The kids swarming in there and instantly knowing what to do, where to go and how to climb. The smiles on their faces. That’s worth more than anything,” Jenkins said.

The money will pay for an expansion to the new playground at the Alfred Jenkins Field House, a much-needed upgrade to the Lions Park Spray Park by the Bernice Sayese Centre and the installation of an indoor batting cage in the gymnasium at the Field House.

“I think it puts the city as a leader in the nation when it comes to this type of development,” said the city’s director of community services, Jody Boulet.

“And as we consider improvements at each of those, accessibility is also at front and centre in the design concepts.”

The Canadian Tire Jumpstart Inclusive Playground will get a 7,000 square foot expansion, bringing it to 18,000 square feet. The playground, near the Alfred Jenkins Field House, is entirely wheelchair accessible and built on a red rubberized pad. Construction on the expansion will begin in the spring and be complete by early summer.

The new elements will include swings, a spinner, two crab trap apparatus for climbing, global motion, a large Netplex structure and a we-go-round. The surfacing will be the red rubberized material like the original playground.

The spray park will be built in in Lions Park, adjacent to the Bernice Sayese Centre. It will include six interactive elements, including a water tower and slash ball.

The batting cage will be in the gymnasium in the Alfred Jenkins Field House in two to three months and will used to pitch softballs, baseballs and cricket balls.

The city said it would not disclose the amount Jenkin’s donated to the projects until the work is completed.

Plans for the upgrades will be tabled at the Feb. 24 City Council meeting.