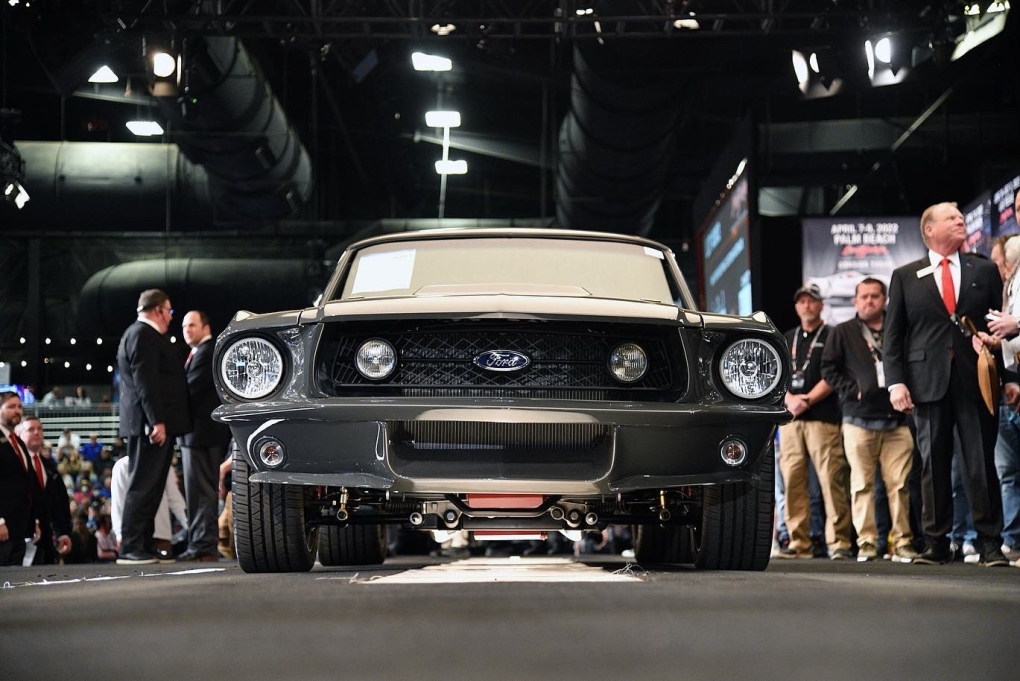 The Pegasus Project Mustang, a 1968 427 Fastback, was bought at auction for $1 million USD by Prince Albert's Gord Broda. The proceeds go to STARS Air Ambulance (Barrett-Jackson/Twitter).

The Mustang spent the summer touring around Saskatchewan before heading to Scottsdale, Arizona for the auction.

The money raised from the sale will help fund the STARS’ fleet renewal — something Broda and his wife Barb are passionate about.

“They have a need for growing their helicopter fleet and Barb and I are people that really believe STARS is an important part of our provincial community,” Broda told CTV News. “They do terrific work and we wanted to throw some support behind it.”

Barb added that because Saskatchewan is small, any accident that happens touches everybody.

“There’s such a small degree of separation between everyone in our province,” she said. “So, every accident, every bad thing, every incident that happens in the province is connected to somebody.”

ONE-MILLION DOLLARS is the hammer price for this 1968 @Ford Mustang Fastback with 100% of the proceeds to benefit Canada's @PegasusforSTARS. pic.twitter.com/D6tBwnI26W

Broda is known for his philanthropy. He bought the charity truck “Snakebit” for $450,000 in 2014 to raise money for the Jim Pattison Children’s Hospital Foundation.

“Barb and I are people that have spent our whole life working in our province. We’re certainly proud of our province and want to do what we can, do our part to support the province and continue to make it a great place to live,” Broda said.

Broda added that he is not only happy to make the donation, he is also happy to bring the car back to the province.

“It’s a gorgeous, beautiful car,” he said. “We know Byron who was the builder of the car and know all of the fantastic work he does.”

The car was unveiled in November in Las Vegas at the SEMA Show, another popular auto event, by Saskatoon‘s Kim Coates, an actor who is well-known for his role in the Sons of Anarchy television series.

Along with the classic car, Broda is also getting a bass guitar from Saskatoon-based Dingwall Guitars which has supplied the instruments to bands like Duran Duran, Genesis and Lee Sklar.

“The guitar is very cool. Barb and I are both music lovers as far as enjoying music, but we’re not great musicians but our two sons seem to want to pick away at the guitar from time to time so I’m sure they’ll have some fun with it,” Broda said.

The Pegasus Project was started by a group of Saskatchewan automotive enthusiasts in 2019 to raise money for STARS Air Ambulance in response to the Humboldt Broncos bus crash in April 2018.

“It was an emotional day for so many people across this country and it was emotional for our family too and we just thought what a great way to raise money,” said Vaughn Wyant, co-chair of the Pegasus Project.

“We’re helping a lot of people that we’ll never meet and they’re in desperate need in a moment and that’s the one thing that the Humboldt bus crash lets us remember. Not just the 16 young lives that were lost in that bus, but how important STARS and organizations with first responders are.”

Humboldt Broncos bus crash survivor Kaleb Dahlgren donated a portion of the proceeds from his book Crossroads, which was released in March 2021, to the STARS Pegasus Project.

People are still able to donate to the Pegasus Project through its website.

The FBI search of Donald Trump's Florida resort is an extraordinary, historic development given that it targeted a former President of the United States and set off a political uproar he could use to stoke his likely 2024 White House bid.

In a growing challenge to Russia's grip on occupied areas of southeastern Ukraine, guerrilla forces loyal to Kyiv are killing pro-Moscow officials, blowing up bridges and trains, and helping the Ukrainian military by identifying key targets.