PRINCE ALBERT -- A tribute to 215 children who died at the former Kamloops Indian Residential School was placed on the steps of Prince Albert City Hall over the weekend.

On Monday morning, people added to the memorial by placing shoes, notes and stuffed toys on the front steps to honour the children, whose remains were discovered over the Victoria Day long weekend.

In a Facebook post, Sanderson said “I saw similar posts from other cities and didn't see anything for P.A. If you advocate for Indigenous people, feel free to do so also.”

The preliminary findings from a survey of the former school grounds uncovered the remains in a mass grave. Some bodies are estimated to be as young as three years old.

The Tk'emlúps te Secwépemc First Nation disclosed the findings to the public on Thursday.

Usually, Orange Shirt Day – which is held to remember those who attended residential school – occurs in September.

But staff at the Prince Albert Indian and Metis Friendship Centre wore their orange shirts to work on Monday to show support for people grieving in the Tk'emlúps te Secwépemc First Nation and to bring awareness locally.

“With all the emotions going around, people are so taken aback by this. There has to be something to honour those who didn’t come back from residential school,” said the centre’s resolution health support worker Linda OSoup.

OSoup said due to COVID-19, they suggest people add to the memorial or find a way to personally honour the victims and families by putting out a teddy bear or shoes.

“It finally brings that into light instead of being a side project.” 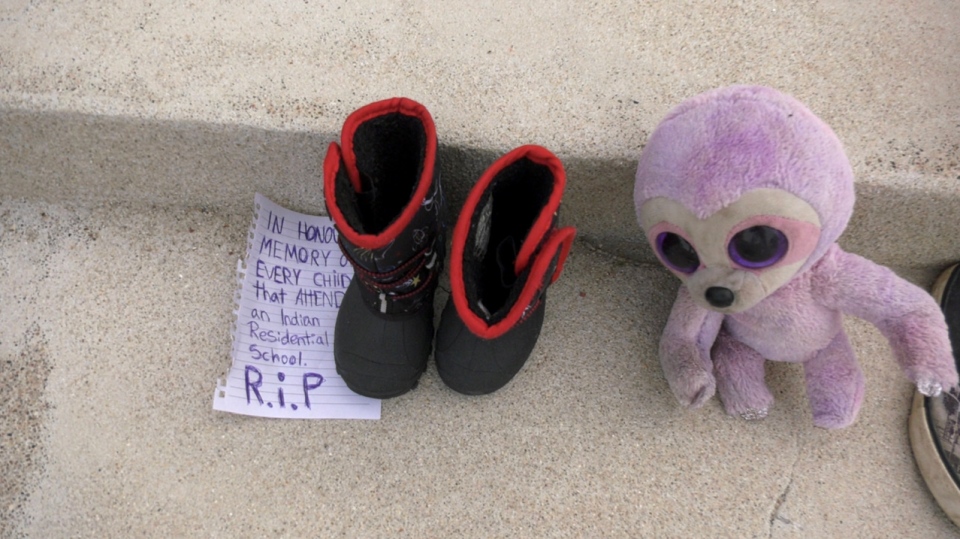 “This brings the physical evidence that’s needed so that they can go forward,” said OSoup.

The flags at Prince Albert City Hall were lowered to half-mast in honour of the children and their families.

Members of the Prince Albert Grand Council (PAGC) hosted a minute of silence at 2:15 p.m. on Monday. They gathered at the site of the former Prince Albert Indian Residential School.

The prayer vigil included drumming and jingle dancing to honour the 215 victims found on the grounds of the former Kamloops Indian Residential School.

Health support worker and residential school survivor George Mirasty helped organize the event on short notice. He said many people he knew where disturbed by the discovery in Kamloops.

“I want healing to begin. I want Canada to take responsibility for what happened,” said Mirasty.

Mirasty attended the school in Prince Albert from 1960 to 1969 and said he ran away three times and could have frozen to death.

“Surviving sickness, surviving the beatings. It just touched my heart and it bothered me,” Mirasty said.

“There's more information that's out there, but the governments and the institutions, they're just not coming forward,” said Tsanni.

Residential school sites in the PAGC include the former schools in Prince Albert, Sturgeon Landing, La Ronge and Timber Bay.

The PAGC said it's also time that the government recognizes 2,000 of the former students of the Timber Bay School that operated between 1952 and 1994 as a residential school, as many children who attended had Indigenous ancestry.

At least 150,000 Indigenous children attended residential schools in Canada from the 1870s to 1996, according to the Truth and Reconciliation Commission.