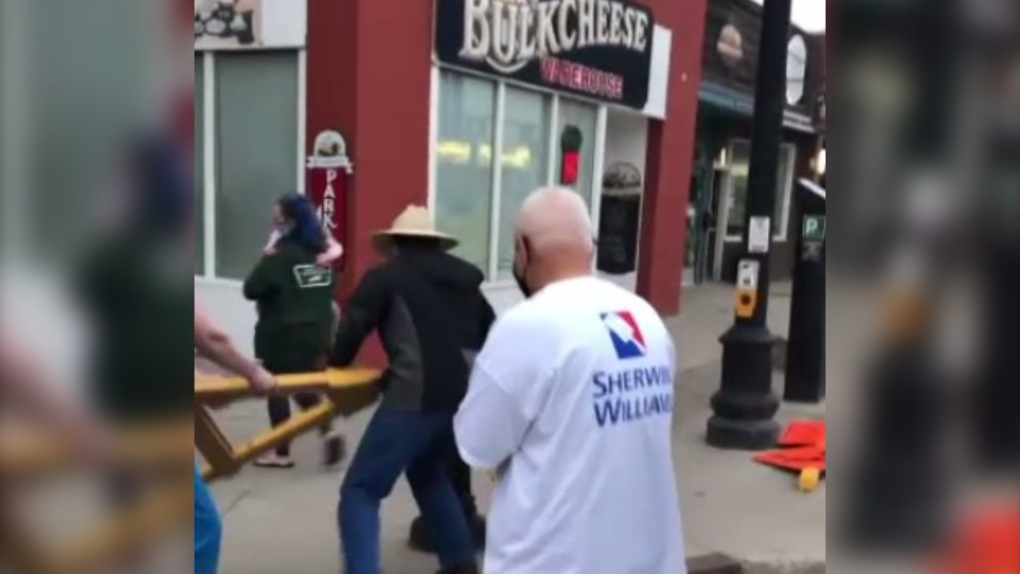 A still image of a video of the incident shared on social media. (Instagram/tense_corvid)
Saskatoon -

A man was arrested after the painting of a Pride-themed crosswalk in the city's Broadway district was disrupted in an incident OUTSaskatoon says was fuelled by homophobia and racism.

"Last night there was an incident involving an individual who attempted to disrupt our Pridewalk painting on Broadway Avenue and 10th Street East," the organization said in a statement issued on Twitter Thursday afternoon.

"Their actions were fueled by homophobic and racist comments which attempted to incite violence."

According to police, a man was arrested after a report of a distrubance in the area.

"Initial reports stated that a man was aggressively shouting at a group of individuals painting a crosswalk," Saskatoon Police Service (SPS) said in a news release.

"It was also reported that the man was attempting to remove road barricades," SPS said.

Officers located and arrested a 71-year-old Quill Lake man in connection to the incident.

The man was charged with causing a disturbance and was relased with an appearance notice, SPS said.

A video shared on social media appears to show a portion of the incident.

A man can be seen arguing with participants and moving barricades set up for the event.

"What happened last night, and the recent aggravated assault on a queer man in Toronto are reminders of the harassment and violence, our 2SLGBTQ communities continue to face, OUTSaskatoon said in its statement.

"While Pride has evolved to also include celebration, there remains plenty of basic rights and freedoms we must fight for," the statement said.