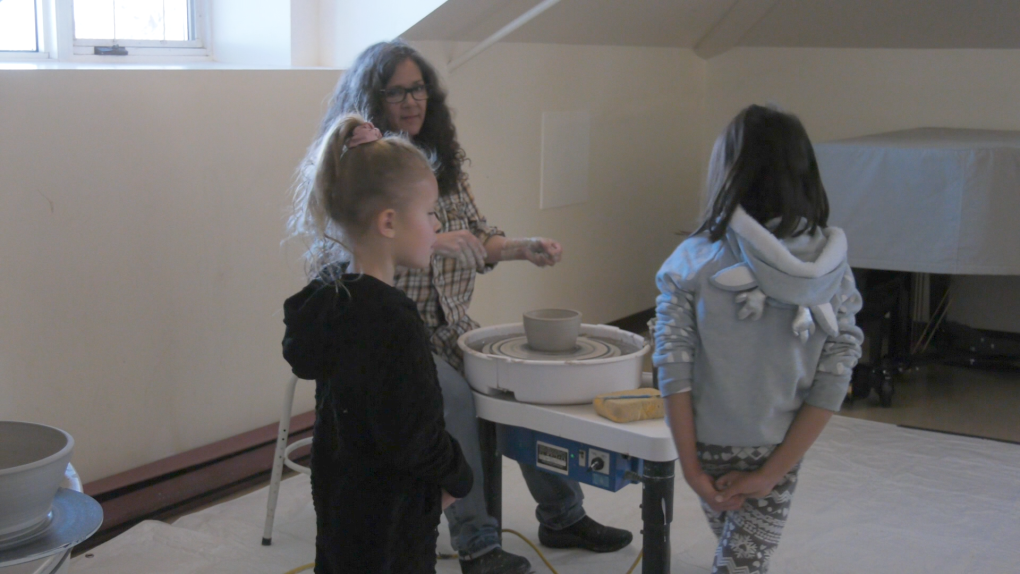 The Saskatoon Potters’ Guild brought out hundreds of holiday shopper for its Christmas sale at the Albert Community Centre on Saturday and Sunday.

Local artists filled tables with their creations and pandemic stockpiles.

This was the first winter sale since the beginning of the pandemic for the group, more than a dozen artists have been hard at work making clay pieces in different mediums.

With plenty of time on their hands for the last two years, the artists’ collections were starting to get full.

“I think a lot of people had saved up a lot,” said Gail Sherwin. “We had a spring sale but not everybody was in it, and we have a lot of new members to the guild and they were really excited and enthused. We’re happy to have them here.”

While most of the artists were selling their work, others were giving demonstrations — and the process of turning a lump of clay into a piece of art was mesmerizing to watch.

“I think the kids are surprised at how slimy it gets, and they’re surprised that clay is actually dirt,” said Tina Morton, who did clay-throwing demonstrations, where the clay spins on a rotating table, formed with the fingers and some water.

While it’s a satisfying process to watch, Morton says there’s a meditative aspect, and even life lessons that can be gained from the hobby.

“If my mind wanders, often the clay goes with it,” said Morton, who didn’t have any pieces to sell this year as she’s busy building a custom kiln to finish her artwork. “So you learn to have a quieter mind while throwing a pot.”

Sherwin says it’s a hobby that forces you to adapt quickly when things go wrong.

“The thing is, you never really know what you’re going to end up with,” Sherwin told CTV News. “You think, I’m going to make a big bowl, and you end up with a salsa dish, you just don’t know.”

Another example is Harm Maathuis and his work with crystalline glaze, which gives off radiating explosions of colour. The crystals form by firing the clay and very gradually reducing the temperature. He says there’s no way of knowing how it will turn out, but he’s usually pleased with the result.

The federal government is seeking to delay the extension of assisted dying eligibility to people whose sole condition is a mental disorder until March 17, 2024.

The bizarre history of Groundhog Day

It's about as strange (and cute) as holidays get. So how did Groundhog Day go from a kooky local tradition to an annual celebration even those of us who don't worry about winter can find the fun in?

Australia is removing monarchy from its bank notes

Australia is removing the monarchy from its bank notes. The nation's new $5 bill will feature an Indigenous design rather than an image of King Charles III. But the king is still expected to appear on coins that currently bear the image of the late Queen Elizabeth II.

The Quebec rodent who predicted whether spring would arrive early, Fred la Marmotte, died the day before Groundhog Day.