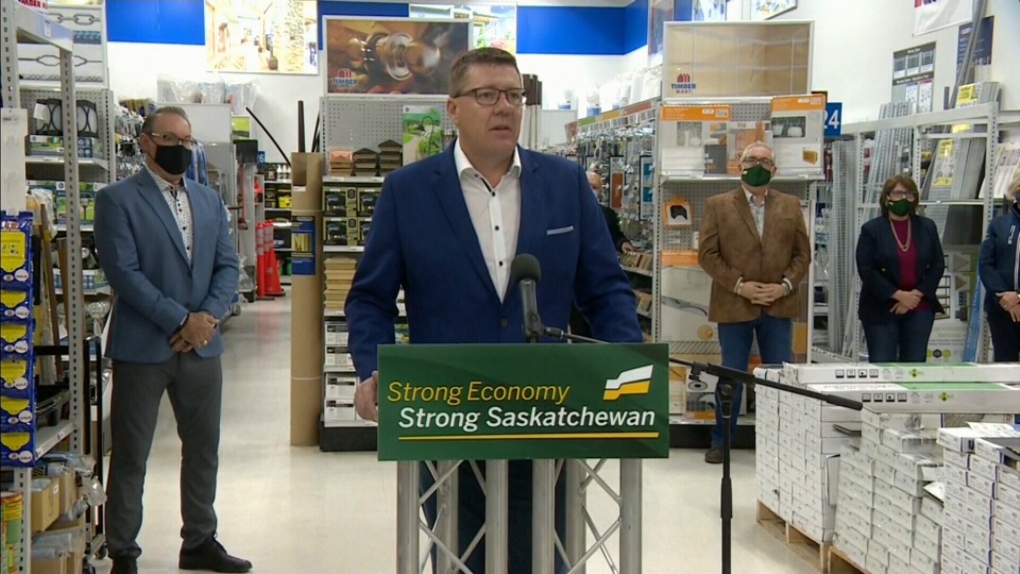 Scott Moe, the Leader of the Saskatchewan Party, speaks at a campaign event in Prince Albert on Oct. 3, 2020.

SASKATOON -- The Saskatchewan Party says it has become aware of a possible COVID-19 exposure at an election announcement in Prince Albert on Oct. 3.

On Sunday, the Sask Party issued a media release saying a potential COVID-19 exposure occurred at Econo Lumber Mart, where Sask Party leader Scott Moe made an election promise to reduce the business tax rate over the next three years.

In a news release, the Sask Party said the business owner confirmed no attendees or participants in the announcement had contact with the individual that was the source of the potential exposure alert.

During the announcement, a number of precautionary measures were in place including physical distancing, mask usage, and hand sanitization, the Sask Party said in the media release.

In the wake of this possible COVID-19 exposure, Sask Party leader Scott Moe will be self-monitoring for 14 days. The Sask Party said Moe and his campaign team have not experienced symptoms of the virus, but if symptoms appear, they will immediately self-isolate and arrange for testing.

The Saskatchewan Healthy Authority is asking anyone who attended this business during the specific date and time to self-monitor and if they develop symptoms of COVID-19, to immediately self-isolate and call HealthLine 811 to arrange for testing.