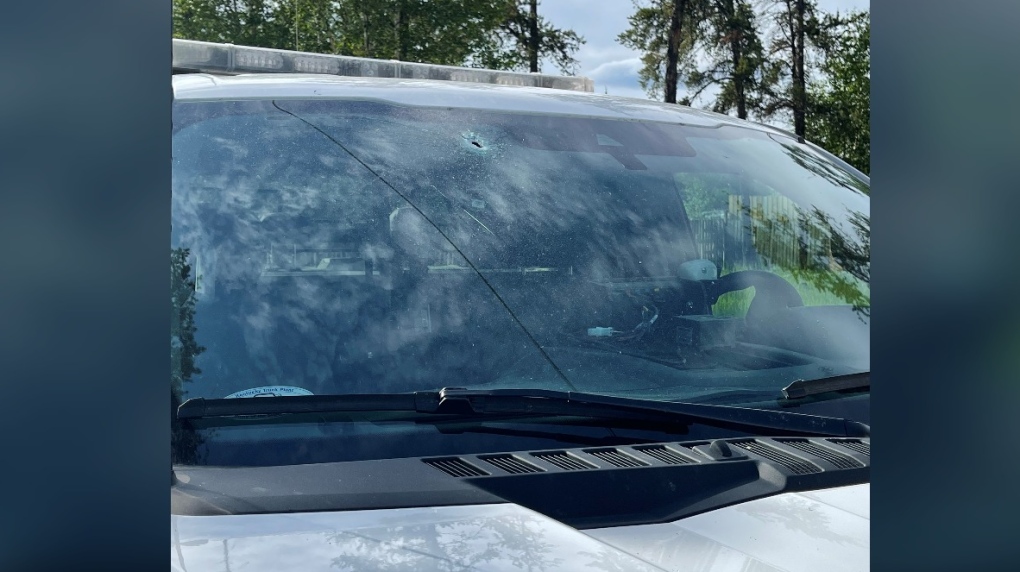 A Saskatchewan RCMP vehicle was shot in the windshield and radiator in La Ronge on June 19, 2022, RCMP say. (Courtesy RCMP)

Saskatchewan RCMP has released new details about a shooting Sunday in La Ronge that prompted a public safety alert.

"We hope the information we are releasing today gives the public more insight into the seriousness of what occurred," Staff Sgt. Dean Bridle, La Ronge RCMP detachment commander, said in a news release.

Around 11:30 a.m., two La Ronge RCMP officers were conducting patrols in the community when a black car sped past their vehicle on Far Reserve Road, the release said.

The officers activated their emergency equipment to initiate a traffic stop, but the vehicle continued driving and turned into a driveway at a residence on the 100 block of Far Reserve Road, police say.

The male driver fled the area on foot and one RCMP officer ran after him. The second officer was outside of the police truck when a second male exited the car with a gun and fired at the police vehicle and officer, RCMP say. Bullets hit the vehicle's windshield and front radiator.

Police say a gathering was happening at the home where the black car was parked. Multiple people exited the and were arrested, including a male and female that police determined were also inside the black car and went inside the house after the guns were fired. A third female from the black car is unaccounted for, police say.

Police issued an emergency alert at 12:29 p.m. given the serious nature of the incident and because guns had been fired, RCMP say. A second alert was issued at 1:40 p.m.

"At one point a drone was flying above RCMP officers on scene," the release said.

"While we understand the public’s interest in serious incidents, its presence and unknown intent impacted police officer safety. An RCMP officer on scene called out on a loud hailer and a message was included in the emergency alert update asking the operator to stop using their drone. Shortly after these two actions, drone activity in the incident area ceased."

The RCMP critical incident response team responded to assist. As a result, around 4:30 p.m. three more people, two males and one female, exited the home and were arrested, RCMP say. The safety alert was cancelled at 5:35 p.m.

In total, 17 people were arrested in relation to the incident. As a result of continued investigation, 15 people have been released without charges and determined not to be involved, RCMP say.

The investigation is ongoing and the whereabouts of the initial male who fled the area on foot, the male who fired a gun and a female occupant of the car have not been located, according to the release.

The first suspect is described as a male with short dark hair with sides shaved, wearing dark pants and a dark shirt with gold patterns down the sleeves and dark runners. If you see him, do not approach him and contact the police immediately, RCMP say. 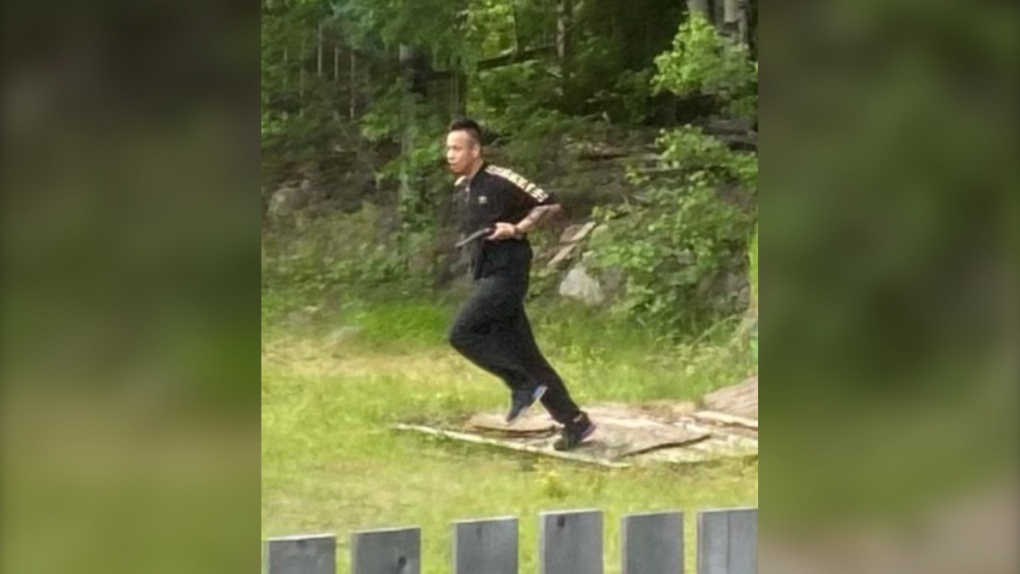 Saskatchewan RCMP released this photo of a suspect in an alleged shooting in La Ronge on June 19, 2022. (RCMP)

No RCMP officers were injured and no other injuries have been reported to police, the release said.

Prince Albert RCMP, with the help of Saskatoon, Yorkton and Regina RCMP, has taken carriage of the investigation.

There will be a continued police presence on Far Reserve Road during that time, police say.