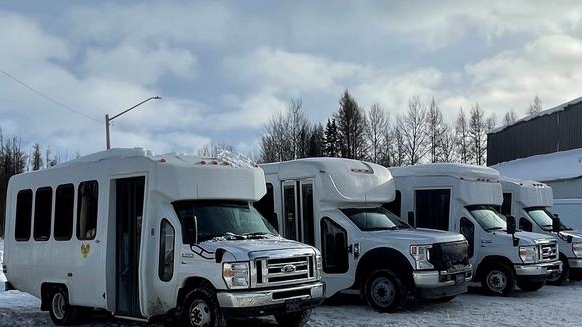 A free shuttle service that runs from La Ronge to Prince Albert and back began operating on Monday.

This project is spearheaded by Ron Woytowich, Executive Director with the Kikinahk Friendship Centre. He says this project will help show there is a demand for public transportation service from La Ronge to Prince Albert.

“It’s going to work no matter what, I know it. But this is a good way of finding out the actual need,” said Woytowich.

Woytowich secured funding from the federal government and different agencies to be able to provide the shuttle service for free until March 31.

“If we run six days a week and we don’t drive around Prince Albert too much and just take them to one spot or two, it’s going to be about 90,000 kilometres in those five months.”

The shuttle is a 15-passenger bus that has been acquired by the Friendship Centre a few years ago. Woyotwich says they currently have a total of four buses that can be used for this project and because the trip is free, they will accept passengers on a priority basis.

“We are going to designate needs. If somebody was to just say ‘I’m going shopping,' I’m sorry, you are going to be at the bottom of the list. But if somebody needs to go to the hospital or education-wise or social services, then they are going to have first choice,” said Woytowich.

The free service also works for residents of Prince Albert who need to go to La Ronge.

The drop-off and pick-up points are the Kikinahk Friendship Centre in La Ronge, the Co-op in Air Ronge and the bus terminal by Central Avenue in Prince Albert.

A 101-year-old message has been discovered by workers removing the base of a former statue in front of the Manitoba legislature.

Grandparent scams are on the rise. Here's how you can protect yourself

Police across the country are seeing a rise in criminals preying on fears of the elderly with what's known as grandparent scams.

Emails released through a public inquiry suggest federal Liberal political aides were scrambling earlier this year to figure out the extent to which members of the Canadian Armed Forces were supporting "Freedom Convoy" protests that had gridlocked downtown Ottawa.

Amazon CEO Andy Jassy said Wednesday the company does not have plans to stop selling the antisemitic film that gained notoriety recently after Brooklyn Nets guard Kyrie Irving tweeted out an Amazon link to it.

A judge declared a mistrial Wednesday after jurors said they were hopelessly deadlocked at the trial of "That '70s Show" actor Danny Masterson, who was charged with three rapes.

The former CEO of the failed cryptocurrency exchange FTX said Wednesday that he did not 'knowingly' misuse customers' funds, and said he believes his millions of angry customers will eventually be made whole.