'Paleontology isn’t dead': Here's why researchers were 'stunned' by this dinosaur's last meal 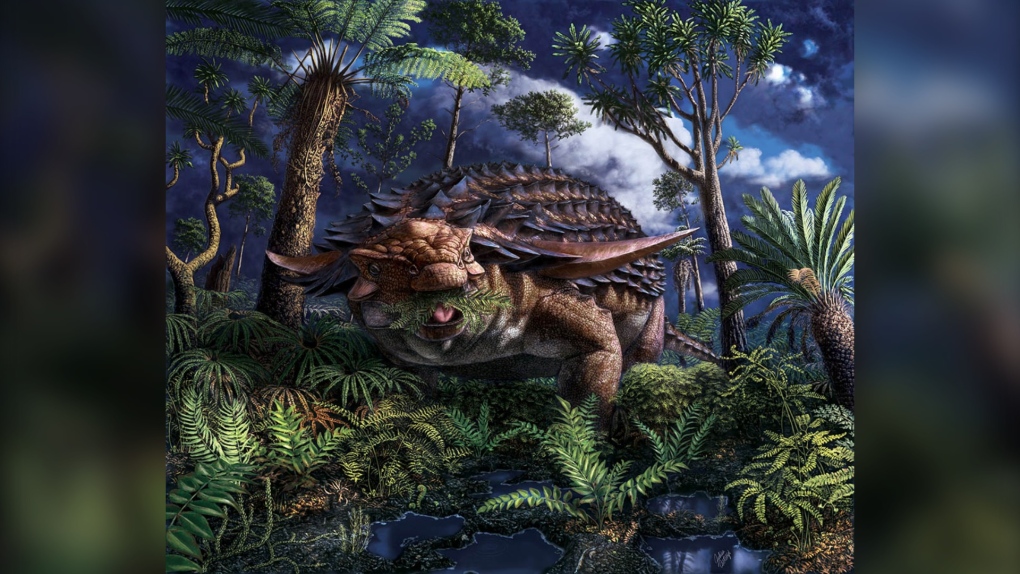 SASKATOON -- Researchers at the Royal Tyrrell Museum of Palaeontology in Drumheller, Alta., Brandon University and the University of Saskatchewan (U of S) have had a ground-breaking look at a dinosaur’s last meal.

The 1,300-kilogram nodosaur - a type of ankylosaur - died more than 110 million years ago and was discovered in a mine near Fort McMurray in 2011. CTV Saskatoon reporter Jonathan Charlton spoke with Jim Basinger, a paleobotanist and a professor of geological sciences at the U of S, about what its unique preservation means for the field. This interview has been condensed and edited for length and clarity.

Why would you want to study the nodosaur’s stomach contents?

This kind of evidence is so rare, there are only two herbivorous dinosaurs that actually have stomach contents preserved that we are reasonably confident in. This particular dinosaur is unequivocal. It’s very clearly stomach content. It’s a basketball-shaped mass in the right place in the remains of the animal. In that way this is unique - there’s nothing that comes close.

How did it survive so many millions of years?

The plant matter inside the stomach is extremely well preserved. The cells are visible, you can see what the tissue is and it helps us understand exactly what the plants are. In order for that to happen death had to occur rapidly after the meal and then the contents had to be preserved over millions of years. If an animal eats something it gets digested - over not that many hours you can’t recognize anything. So obviously the animal ate and it died. It got carried out to sea so we believe it may have just fallen into a river and drowned and swept out to sea so digestion stopped.

The carcass itself sank to the bottom of the ocean and was preserved in very fine grained sediment that sealed it off and essentially mummified the animal.

What was its last meal?

We often think of large animals, certainly nowadays, eating nutritious food. We don't usually think of ferns as being nutritious. Not that many big animals these days eat ferns for their diet - mostly they’re eating grass and other things which are highly nutritious. But at that time there were no flowering plants around so there were no grasses, there were no shrubs and herbs that we think of today as food for large herbivores.

We now can see for certain that this animal selected ferns at least for its last meal, presumably for its diet, and would have had a physiology well equipped to deal with low-nutrition food such as ferns. And the animal was deliberately choosing ferns because over 80 per cent of the stomach contents appear to be ferns.

What went through your mind when you saw how well preserved this was?

Stunned is the best answer. It’s so unusual to find any kind of remains of internal organs or anything like this in a fossil. And then when you do find it, you think it’s not going to be well preserved, there’s not very much information we're going to be able to get from it. We were stunned when we looked at the sections of the stomach contents and could actually see fragments of leaves, the reproductive organs in these fern leaves and everything we needed to be able to have a pretty clear idea of what the animal had actually eaten.

What else does this add to the knowledge of dinosaurs?

We can use that to potentially understand what the environment was like that it was occupying. It was choosing ferns in a burned landscape. Very commonly ferns are the first thing to emerge after a forest fire and it is very likely this animal was deliberately choosing areas that had been burned in order to take advantage of ferns that were coming in after a fire. This is an early example of a fire ecology, an animal taking advantage of that. Much as modern large herbivores do today, they take advantage of fire and the emergence of that flush of growth following a fire.

What new questions does this discovery raise?

These kinds of studies where you’re actually dealing with something unexpected, something new, reminds us always that the study of paleontology isn’t dead. There's still lots to learn, there’s still new discoveries out there. So we keep encouraging people to keep an eye on paleontology. It’s not all done. It’s not just a pile of bones in museum drawers. Lots of great information out there still waiting to be discovered.