P.A. firefighters called after teen gets stuck in baby swing 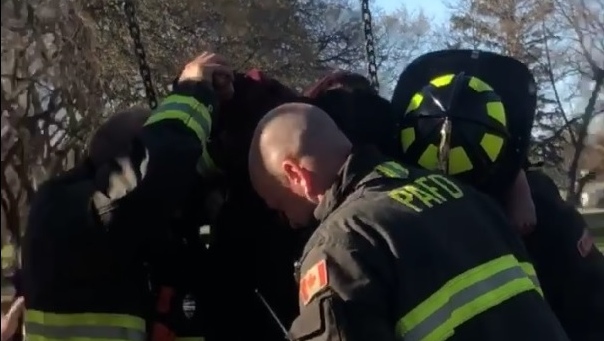 Firefighters helping a teen who found herself stuck in a baby swing at a Prince Albert playground. [Facebook]

Prince Albert Fire Department responded to an unusual call Monday after a teen found herself stuck in a baby swing at the Kinsmen Park Playground.

Firefighters arrived on scene around 6 p.m. to find the girl’s legs stuck in the swing and were able to lift her out unharmed, according to the department.

A video posted on social media of the incident shows the light-hearted rescue effort as the firefighters helped the girl out.

Deputy Fire Chief Alex Paul said this type of call doesn’t happen often but he does remember a similar incident about 10 years ago when a teenager got stuck in a “monkey bar type structure” meant for younger kids.

“The teen had wedged themselves into a tube and couldn’t get out on their own,” Paul told CTV News.

“They just needed to relax and have someone pull them out, but teens try some things they shouldn’t.”