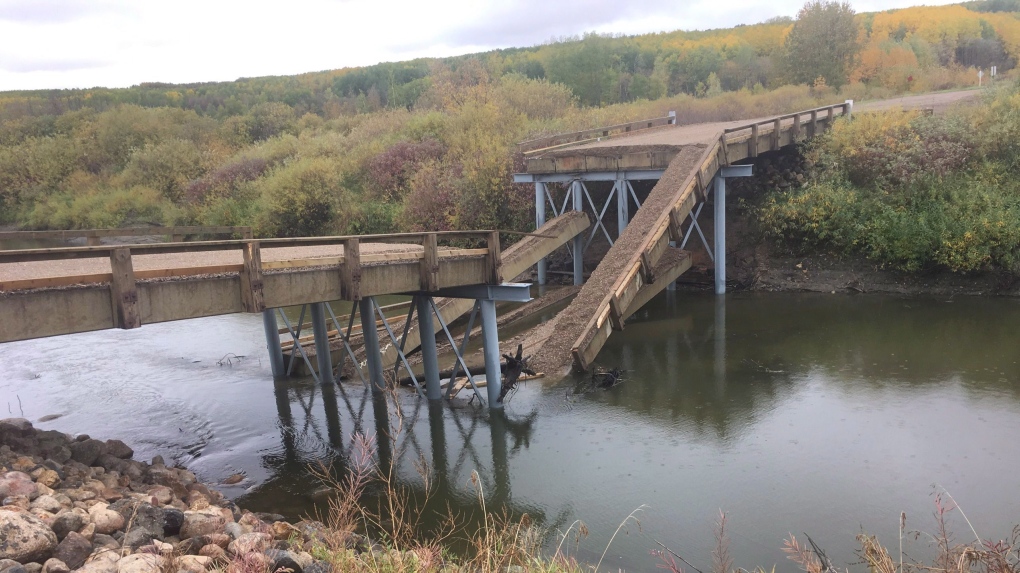 The reeve for a community in eastern Saskatchewan says both he and the construction company don't know why a newly built bridge collapsed just hours after opening. The collapsed bridge is seen in the Regional Municipality of Clayton in a Tuesday, Sept. 18, 2018, handout photo. (THE CANADIAN PRESS/HO-Duane Hicks)

HYAS, Sask. -- A rural politician in eastern Saskatchewan says he's at a loss to explain why a newly built bridge collapsed just hours after opening.

Reeve Duane Hicks said the Dyck Memorial Bridge in the Rural Municipality of Clayton looked good on Friday morning when it opened to traffic.

But by 4:30 p.m. the same day, part of bridge deck had collapsed into the Swan River below.

No one was injured and the builder, Can-Struct Systems Inc., has hired an independent firm to perform tests. Both the company and municipality met on Saturday night to discuss the issue.

Greg Anderson, a bridge inspector with Can-Struct, did not respond to requests for comment.

Hicks was in Yorkton, Sask., when he received a call around 2 p.m. Friday from the town's foreman who said the bridge wasn't looking right. So Hicks picked up a local counsellor and went to inspect the bridge himself and noticed that it had a compression in it.

He received a call from the fire department soon after saying that the bridge went down.

Hicks suspects there may have been something under the bridge that let go which caused the collapse. He said he's not blaming anyone, because he doesn't know what happened.

"It's an unknown fact at this time so we cannot point fingers at anybody," he said.

The previous bridge had been in place for more than 50 years and Hicks estimates that 50 to 60 cars pass over it each day.

The Saskatchewan Association of Rural Municipalities inspected the bridge earlier this year and told the RM that it would need to be replaced as it was rotting and dangerous.

The bridge is mostly used by farmers, so Hicks said the municipality wanted the bridge completed in time for harvest.

The municipality put out a tender and selected Can-Struct, who had been working on the project for the last four or five weeks.

Hicks, who has been the reeve for two years, said the bridge was built to Canadian standards and the municipality has been told it won't be on the hook for the cost of repairs.

Counsellors met for several hours on Monday to discuss their options. Hicks said the job will get done.

"That's the bottom line. It's going to get fixed."