Reality TV fans have a new opportunity to get their fix of business shows, as a new series features Indigenous businesspeople from across Canada.

Airing on Sunday nights on APTN, Bear’s Lair is similar to Shark Tank and Dragon’s Den, but instead of pitching their ideas and giving up ownership of their companies, contestants are trying to make it back to the final episode and win the $100,000 grand prize.

Six episodes are grouped into categories, and contestants try to impress the judges with their business ideas.

Show creator, judge, and Indigenous business mentor, Geena Jackson said the series can’t be called a competition, but something close.

“We’re calling it a ‘co-op’etition because I think people that watch the series are going to see that about how we uplift each other, how we support each other,” Jackson told CTV News.

One of the contestants is 3R Innovative Imaging, a business made up of high school students from One Arrow First Nation.

Business Club Coordinator, Joe Taylor said it started as a school project, but the students have been taking and fulfilling orders throughout the pandemic. Now, their artwork is carried in 14 stores. 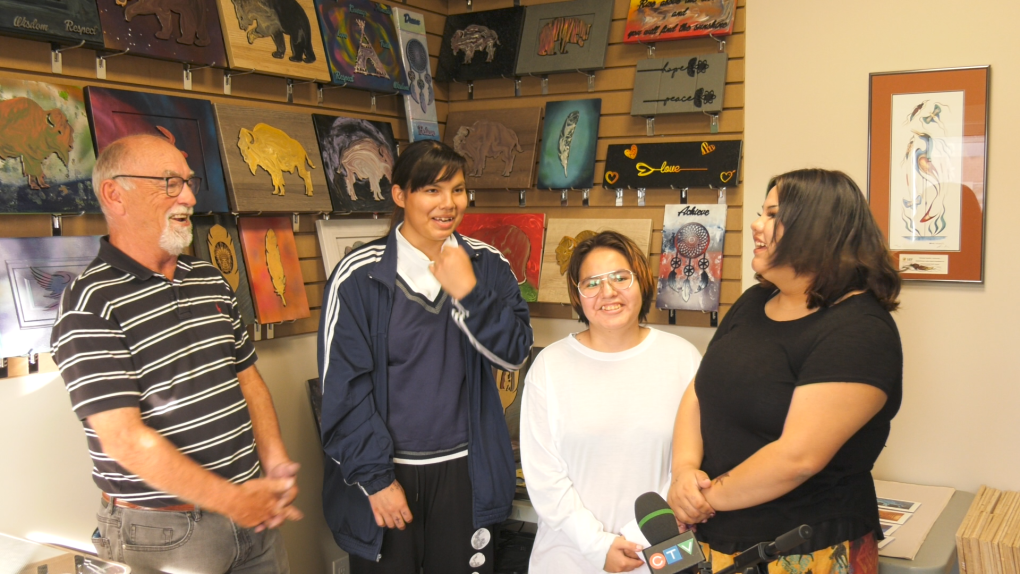 Business Club Coordinator Joe Taylor, Phoenix Willier, Andy Daniels and Ruby Daniels of 3R Innovative Imaging. (John Flatters/CTV News)“We used business as a way of finding out about things they knew nothing about, and meeting people they would not otherwise have a chance to,” Taylor said. “They’ve met the movers and shakers of the corporate world, and everywhere they go, they become the centre of attention in a heartbeat.”

Self-taught Indigenous baker, Alicia Hrbachek of Ally’s Cake Creeations said showcasing her business to the Bears was a great experience, but the connections she made are even more rewarding.

“It was a super supportive environment,” Hrbachek told CTV News.

“And then to be surrounded by so many Indigenous entrepreneurs, some just starting up and some way up there with buildings and staff, it just made me feel like where I was in my life was where I was supposed to be.”

The final episode of season one airs October 16th, but Jackson said plans for season two are already in motion.

“I’m just so excited for the nation to see who we are as people,” she said.

Only one in five Canadians are aware that a person with HIV can't sexually transmit the disease if they are taking the proper medication, according to a new survey that suggests Canadians still have a long way to go in understanding the medical and social realities of HIV.