SASKATOON -- Saskatoon’s 2SLGBTQ+ community says the Saskatchewan NDP and the Green Party are neck-and-neck in terms of looking out for the community while the Sask Party falls behind in an election report card on 2SLGBTQ+ topics released Wednesday.

On Oct. 21, OUTSaskatoon and Saskatoon Pride released a report card on all six provincial political parties, grading them on their plans, commitments and support for the 2SLGBTQ+ community.

The NDP scored the highest grade, A-. The NDP reiterated its election promises of opening mental health emergency rooms in Saskatoon, Regina, Prince Albert and Moose Jaw and increasing addictions treatment by $10 million.

The NDP also alluded to its promise to develop a Saskatchewan suicide strategy. As for the gender designation on government identification cards, the NDP said it believes the provincial government has a responsibility to uphold the Human Rights Code and elimiate discriminatin in Saskatchewan. The NDP said it would work to ensure institutions and official documents are inclusive and affirm the identity of Saskatchewan people.

The Saskatchewn Party received a grade of C-, despite the fact that the party while in government raised the Pride Flag at the legislature for Pride Month, and on Jan. 29 proclaimed a Day of Action against Hate and Intolerance, affirming the rights of 2SLGBTQ+ residents of Saskatchewan.

The Sask. Party also outlined how it invested $435 million for mental health and addictions services, investing more than $3.4 billion into mental health and addictions treatment since 2007. The Sask Party noted how it introduced the option to mark an “X” under a person’s gender for drivers’ licenses and the removal of gender markers on birth certificates. If re-elected the Sask PArty said it would review the process for gender markings on health cards as well. 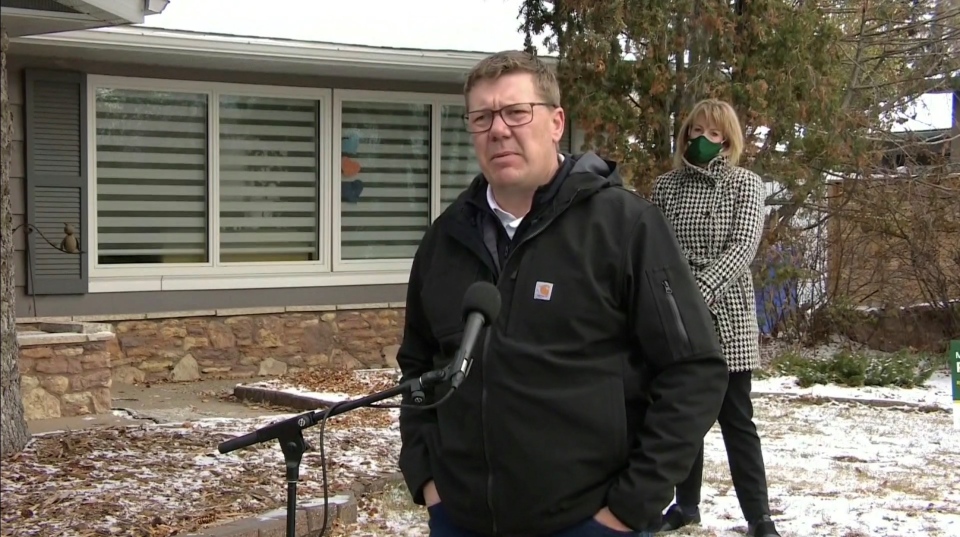 At a campaign stop in Regina Wednesday, Moe addressed his party’s grade. He said it is a reflection of the party detailing what it has done while in government as opposed to new initiatives the Sask Party plans to achieve if re-elected.

“We were focusing on items and initiatives we had already done as opposed to initiatives that we are going to do and I want to say this is an ongoing conversation and an ongoing effort of any government,” Moe said.

“We have made changes with respect to gender markings on driver’s licenses and always been engaging with the community on where we need to go from a government-support perspective.”

Jack Saddleback, cultural and project coordinator with OUTSaskatoon, said the NDP received a higher grade because the party laid out plans moving forward while the Sask. Party spoke about its track record in government.

“We did have clear paths forward laid out by some parties as opposed to other parties that spoke of past things that happened during their time in government, which was also done by community partners in our province,” Saddleback said. “Regardless of whatever party gets elected we have highlighted, within this report card, four main areas that any party, when they do get into office, needs to address.”

Those include addressing systemic barriers the 2SLGBTQ community faces, whether in healt hcare access, mental health supports and ongoing support for marginalized people.

At a campaign stop in Saskatoon, Matt Love, NDP candidate for Saskatoon Eastview, said the NDP has always been proud of its relationship with the 2SLGBTQ community in promoting the Pride movement.

“We’re proud of our track record that our candidates bring to the table as candidates already promote these in their lives, careers and service to communities,” Love said. “We have always been partners with folks like OUTSaskatoon and other organizations that are here to bring equity and representation to all people in Saskatchewan.”

The Saskatchewan Green Party earned a B+ grade. In its answers the Green Party said it would quickly move to end discriminatory blood donations, introduce a motion in the legislature to allow trans inmates to pick which population they feel they most closely belong to, adding right now trans inmates are placed in the population identified on their birth certificate.

The Green Party said it would make sure 2SLGBTQ+ communities would be represented in Saskatchewan schools and it promised to move that Pride Day be declared a provincial holiday.

The Buffalo Party, Saskatchewan Liberals and the Progressive-Conservative Party of Saskatchewan were all given an F for not participating.