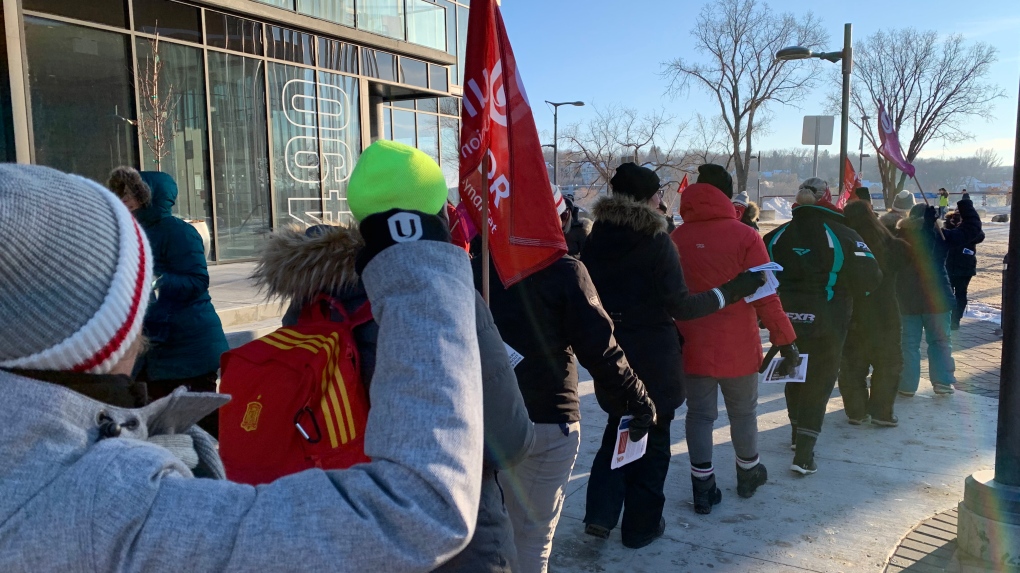 About two dozen women, who are members of Unifor, protested outside Alt Hotel Saskatoon in the city's downtown, where Federated Co-op Limited (FCL) CEO Scott Banda was expected to speak during a Women Entrepreneurs of Saskatchewan event.

“If Mr. Banda thinks he can claim to be a strong supporter of women in the workplace while he is waging an unscrupulous battle against refinery workers, we’re here to remind him his actions speak far louder than his empty words,” said Lana Payne, Unifor National Secretary-Treasurer in a news release.

Nearly 800 members of Unifor Local 954 have been locked out from the Co-op Refinery since December.

Co-op workers issued a strike notice to FCL after disputes over choice and protection of pension plans wasn’t resolved at the bargaining table.

“There's an impact on work and women when they're locked out and they can't work and they got to look out for their families,” said Josephine Petcher, Unifor national representative and Toronto-area director.

“They have record profits, they make $3-million a day, but they want to gut the pensions of the good people of Regina and of Saskatchewan.”

Those picketing said they want to send a message to Banda about the way Co-op is treating its workers.

“We’re not going to accept the rollbacks on the pension and we’re asking him to play fair and come to the table,” said Petcher.

“Our offer has included a choice of pension, an 11.75 per cent wage increase over four years and a performance bonus. We’re not gutting pensions but asking union employees to contribute to their pensions like most Canadians already do.”

Ryan adds that FCL respects Unifor’s right to picket and are willing to continue bargaining.

“They need to remove the illegal blockade and demonstrate they’re willing to bargain in good faith,” she said.