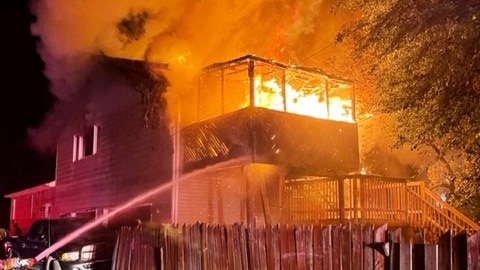 One person living in the home escaped safely from the blaze that caused $200,000 damage.

Saskatoon firefighters were called to the 200 block of Avenue S South at 3:28 a.m. with flames visible from the back of the house, according to a Saskatoon Fire Department news release.

The fire, which originated on a rear deck, was brought under control by 3:58 a.m.

So far, there is no word on what caused the fire.

DBRS Morningstar estimates hurricane Fiona will cause between $300 million and $700 million in insured losses in Atlantic Canada for a record high in the region.

Explosions rattled the Baltic Sea before unusual leaks were discovered on two natural gas pipelines running underwater from Russia to Germany, seismologists said Tuesday. Some European leaders and experts are pointing to possible sabotage during an energy standoff with Russia provoked by the war in Ukraine.

BREAKING | Up to 23 people taken to hospital after exposure to hydrochloric acid in St. Catharines

Up to 23 people are being taken to hospital in St. Catharines following a hazardous workplace incident on Tuesday, Niagara Health confirms.

'We shouldn't have to push people': Most provinces have not made Sept. 30 a stat

A graduated driver's licence program in Alberta that has been in effect for the past 19 years is getting an overhaul.

Police have arrested another man in connection to an alleged violent attack on Elnaz Hajtamiri in a Richmond Hill, Ont. parking garage just weeks before she disappeared in January.

Hurricane Ian tore into western Cuba on Tuesday as a major hurricane, with nothing to stop it from intensifying into a catastrophic Category 4 hurricane before it hits Florida on Wednesday.